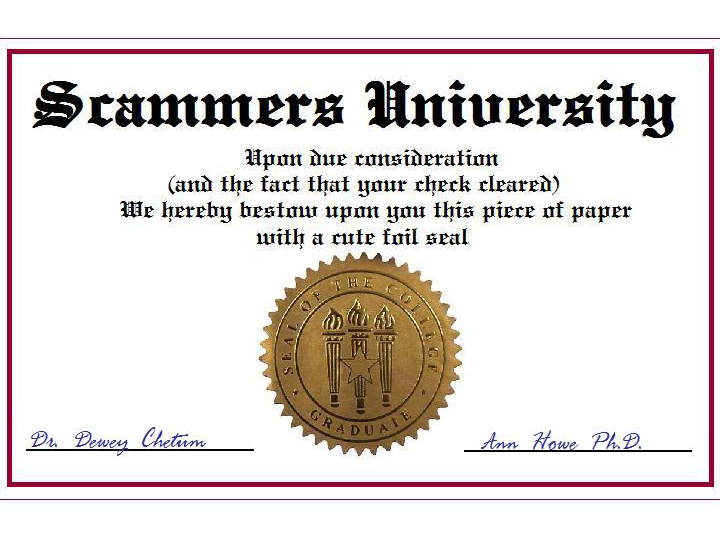 Gilbert Goh, the head honcho of voluntary welfare organisation for workers, Transitioning, states his 10 reasons why Singaporeans must reject the use of fake degrees in the labour market.

This comes as Singapore’s Infocomm Development Authority once again defended its hiring of applications consultant Nisha Padmanabhan, despite the huge outcry online.

Nisha Padmanabhan was found to possess a bachelor’s degree from Mumbai University, and a MBA from degree mill Southern Pacific University.

It also humiliate those who take the effort and pain to earn their way into the competitive labour market by studying hard for a degree.

Fake degree is a unfair nasty short-cut into our lucrative labour market and must be totally eradicated.

It also stains the clean corrupt-free environment we have all along.

2. Mockery of our labour system – fake degree made our government look bad as it exposes the laxity in the way it tries to bring in foreigners by the hundreds of thousands.

Checking them.all will take light years and our government believes that the only way to do it is to allow them in first before lightly applying the selective screening method.

Degree cheaters were exposed previously and jailed but their numbers are too little to make an impact.

It is believed fake certificate cheaters should figure in the thousands or more and if remained unexposed will leave behind untold grave consequences on our labour market.

Thousands of local PMETs stay jobless because these cheaters manage to beat the system and get a job the unethical way.

4. Encourage cheaters – fake degrees also encourage other foreigners to come in with their fake degrees and try to beat the system as there is minimum screening process in place.

Singapore will be the ultimate loser as we have in our workplace incompetent and unskilled foreign workers pretending to be experts in their own field.

One can’t imagine having fake doctors in our midst.

5. Lowering productivity – it is no wonder our productivity has nosedived alot lately as those who work with us are not truly who they profess to be.

Fake certs will hurt the reputation of Singapore and damage our image in the eyes of the world.

Our productivity has went down alot in recent years and this could be due to our false belief that we are getting quality workers but in reality they are not.

6. Meritocracy down the drain – fake degrees also makes a mockery of our stern belief in meritocracy – long practised by our founder Mr Lee Kuan Yew.

Singaporeans took many years to earn their degree often through the hard way and fake degrees certainly hurt the efforts of our own people.

It devalues their hard-earned educational qualification and humiliates them even further when companies like IDA recognises them by believing in the employee’s story.

7. Reinforce foreigner-first policy – the recognition of the fake master degree of a IDA’s employee reinforced the belief that Singaporean companies have all along adopt a foreigner-first mentality.

People are wary of the government’s approach to foreign talent nowadays and such incident gives room for more speculation that foreigners are better treated and let off easily.

Colleagues will now view foreigners with disdain especially if they fail to show result after a while.

Its unfair and totally unjustified as they will be foreign talents who came in with real qualifications but they pay the price for those who falsify their resume.

In the bid to show that we honour the agreement, our government has no choice but to openly show that it has allowed in the number of foreigners from a certain country – regardless of whether they are fake talents or not.

10. End of a 5-decade-long regime – the fake degree saga once again highlights the incompetence of a government that fails to deliver time and again.

From transport fault to the huge influx of foreigners into our shore, the current government has revealed many of its shortcomings.

One feels that the regime’s time is up and the recent failings only reinforced the fact that it could not live up to the demands of a new Singapore which prefers a new form of governance and bearing.

Lee Kuan Yew’s passing may signal the end of a regime that still stubbornly stick to the patriach’s old style of control and total dominance.

Unless the new leadership changes its tact and style, the writing is very much on the wall for the near-demise of the current regime as the young voters will surely prefer something new and refreshing.