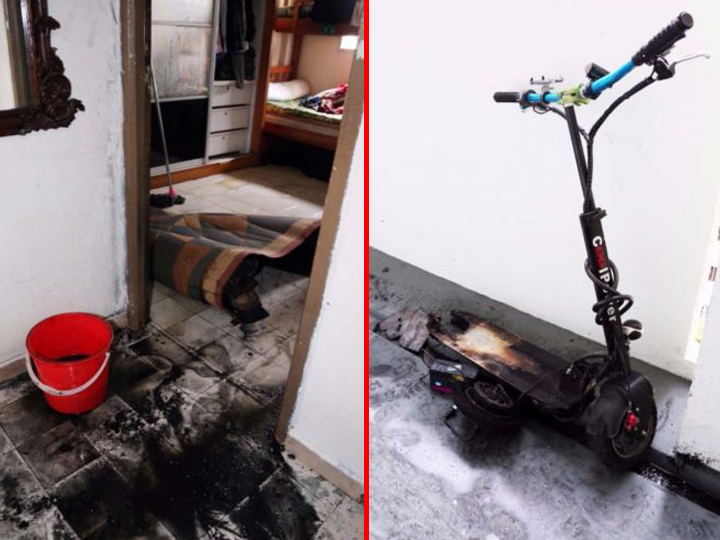 An electric Scooter that was left to charge overnight burst into flames yesterday, injuring 4 persons.

SCDF officers put out the fire with buckets of water.

There were 3 occupants, aged between 23 and 59, in the flat when the fire broke out.

The 23-year-old man, who was sleeping in his bedroom, woke up when he heard an explosion.

Panicking after discovering that his room was on fire, he reportedly broke the bedroom window and climbed out to escape the flames.

Two neighbours from the flat unit’s adjoining units caught sight of him and rushed into his bedroom to pull him up and escape the flat together.

One of the neighbours suffered suffered minor burn injuries on his hands and was sent to Khoo Teck Puat Hospital for treatment.

The flat’s 3 occupants – 2 of whom suffered from smoke inhalation – were taken to Singapore General Hospital.

Investigations into the cause of the fire are taking place.

It’s believed that the fire involved the battery of the electric scooter.

Such incidences involving personal mobility devices have been on the rise.

So far, there have been 13 reports of such fires this year – a 40 percent increase from the same period last year.

If you’re planning to leave your device charging, place it on a flat hard surface to allow dissipation of heat, and don’t leave the device near any material that can easily catch fire.