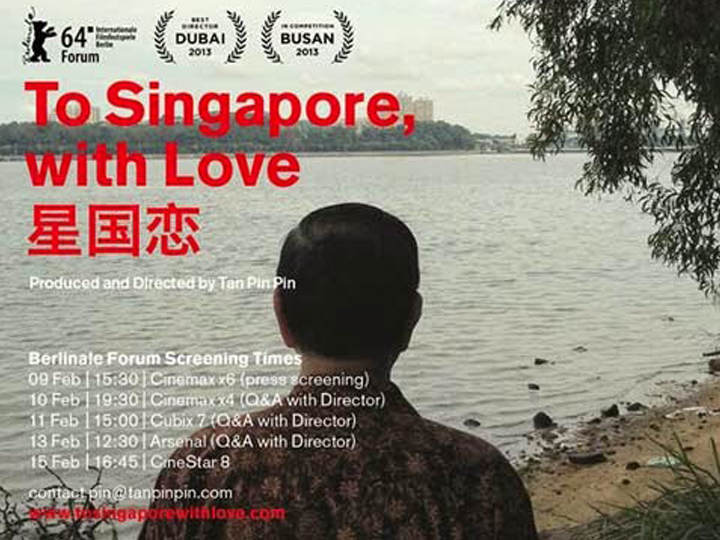 OFFBEAT PERSPECTIVES: The government has a history of banning books or films with alternative perspectives of Singapore’s history as they are deemed as untrue, misplaced in accounts, or a threat to national security.

Some all these books can only be found in foreign land, or through underground means in Singapore. Some of these films were once allowed to be showed on international platforms but not in our very own country.

The film was withdrawn from a film festival here on fears it could have violated a law banning political films, with the makers having submitted written apologies and withdrew it from being screened at the Singapore International Film Festival after they were told they could be charged in court.

The film-makers, all lecturers at the Ngee Ann Polytechnic, had said they just chanced upon a man selling books on a street and decided to make a documentary on him, unaware at first that he was an opposition figure.

It is assumed to be the first film considered political under the Films Act. One of the film-makers had resigned from the school and the two others were not available for comment. The polytechnic told the Straits Times that the three lecturers from the department of film and media studies had not sought the school’s permission to make the film and had considered the matter closed.

It could have possibly been banned in 2002? If the makers had gone ahead with screening it at the Singapore International Film Festival.

Taken from an excerpt of an interview Sindie had with Martyn See in 2010:

J: Were you the first person in Singapore to make political films?

M: No, I am not the first. The first people who made political films and were harassed by the police for it were Kai Sing, Mirabelle Ang and Christina Mok. They were all lecturers in Ngee Ann Polytechnic FSB in 2000. They made a film about J B Jeyeratnam and allegedly the police came and they confiscated equipment and they warned them not to do this.

The news was buried for a year and at the end of 2001, their contracts were not renewed. Straits Times’ Tan Tarn How found out about it. So, basically he wrote about the incident. Until today, the 3 filmmakers have not spoken up about it. 9 years later, they are still traumatized. (pause) So ‘Singapore Rebel’ for me was an attempt to make everything transparent.

To get hold of this film: Ask his son?

A 26 minute documentary on opposition politician Chee Soon Juan made by Martyn See. The documentary has been screened in Australia, Malaysia, New Zealand, Sweden, US, and even the European Parliament.

Side Note: Martyn See is a Singaporean who had undergone 15 months of police investigation for making the film ‘Singapore Rebel’ He has followed up with ‘Zahari’s 17 Years’, a documentary on an ex-political detainee, and ‘Speakers Cornered’, a chronology of brief scenes from a street corner standoff between pro-democracy activists and the police.

The censors declared it a party political film which was illegal, and it was pulled from the 2005 Singapore International Film Festival line-up after the director was warned he could face two years in jail if the screening went ahead.

Media Development Authority’s (MDA) later lifted the ban in 2009 – given the 26-minute video has already been available online and viewed more than 400,000 time by the time the ban was lifted. MDA explained the Political Films Consultative Committee (PFCC) ” viewed Singapore Rebel as a documentary film” falling within statutory exclusions.

Therefore, it “should not be regarded as a party political film”. It would also “set the stage for future political films others might want to make”. MP for Hong Kah GRC Zaqy Mohamad noted: “Elaborating on the considerations in evaluating films would serve as a guide for future projects, and people would be less worried about making such films.”

Ban on ‘Rebel’ lifted; film by Young PAP under review

A 49 minutes film by Martyn See showing an interview with a former newspaper editor Said Zahari sharing on his 17 years as a political detainee in Singapore.

The film was gazetted by the Minister as a prohibited film under Section 35 (1) of the Films Act as he viewed that it’s possession or distribution would be contrary to the public interest. It was deemed as giving a distorted and misleading portrayal of Said Zahari’s arrest and detention under the Internal Security Act (ISA) in 1963 and is an attempt to exculpate himself from his past involvement in communist united front activities against the interests of Singapore.

The Government will not allow people who had posed a security threat to the country in the past, to exploit the use of film to purvey a false and distorted portrayal of their past actions and detention by the Government. The film could undermine public confidence in the Government.

We have given your request due consideration. The prohibition stands as the film gives a distorted and misleading portrayal of Said Zahari’s arrest and detention under the Internal Security Act (ISA) and is an attempt to exculpate him from his past involvement in communist united front activities against the interests of Singapore.

The film was assessed in its entirety, and every part of the film should be taken in the context of the entire film which presents a distorted portrayal of Said Zahari’s arrest and detention under the ISA.

“Zahari 17 Years” continues to be banned in S’pore – BFC

A 45 minutes documentary produced by activist and artist Seelan Pillay. It is critical towards the former premier’s rise to power and subsequent crackdown on his opponents. The film also includes interviews with prominent figures, and scenes of public protests taken in Singapore.

It was submitted to the authorities in May 2009 as a political film. In a hand-delivered letter, the Board of Film Censors (BFC) noted the film contains excerpts from the film Zahari’s 17 Years, which has been gazetted as a banned film under Section 35 of the Films Act. As such, the BFC will not classify the film. The authorities suggested that an alternative version of the film be submitted, one that do not contain any scenes from Zahari’s 17 Years.

The legal status of the film:

– It is not classified or rated.

– It is not gazetted as a ban.

– However, any possession, exhibition or distribution of ONUL constitutes a criminal offence as it contains excerpts of Zahari’s 17 Years, a banned film.

Video : One Nation Under Lee

Censors refuse to classify One Nation Under Lee

It shows a 22 minute video recording of a speech by former leftist leader and political prisoner Dr Lim Hock Siew (who held the second longest serving record behind Dr Chia Thye Poh’s 23 years), who was detained during Operation Coldstore in 1963, and held for 19 years.

The film has been banned under Section 35(1) of the Films Act. Those who own or distribute a prohibited film can be fined up to $10,000 and/or jailed up to two years. It was deemed as “against the public interest” as it “gives a distorted and misleading portrayal of Dr Lim’s arrests and detention under the Internal Security Act in 1963”.

The Singapore Government will not allow individuals who have posed a security threat to Singapore’s interests in the past, to use media platforms such as films to make baseless accusations against the authorities, give a false portrayal of their previous activities in order to exculpate their guilt, and undermine public confidence in the Government in the process.

A 70 minute documentary directed by Tan Pin Pin about the lives of nine Singaporeans who fled Singapore against the backdrop of a communist struggle from 1960s to 1980s. The film has been shown in multiple film festivals overseas, picked up several awards and screenings abroad, including in London in October 2014 and at the Freedom Film Festival in Johor Baru in September 2014.

Even after Ms Tan had appeal to the Films Appeal Committee (FAC) in September, The MDA has decided to remain with the classification the film as Not Allowed for All Ratings (NAR) because the film “undermines national security because legitimate actions of the security agencies to protect the national security and stability of Singapore are presented in a distorted way as acts that victimised innocent individuals”. (Read the full reason here – MDA has classified the film “To Singapore, With Love” as Not Allowed for All Ratings (NAR)

The film team had collated international orders for the limited-edition DVD, with the order window closed on July 31 2015. The DVD is licensed for home use only, and to screen it at festivals and other educational institutions or organisations would require a different license.

It is a region 0 DVD and can be played in all regions. Prime Minister Lee Hsien Loong commented – the political exiles featured in a documentary that cannot be shown in public or distributed here should not be allowed the chance to air their own “self-serving” accounts of the fight against communism.

To watch this documentary: Try underground means? (If you did not buy the limited-edition DVD)

This story was written by Offbeat Perspectives.
Send us your stories at mail@redwiretimes.com
Find us on Facebook! https://www.facebook.com/redwire.singapore