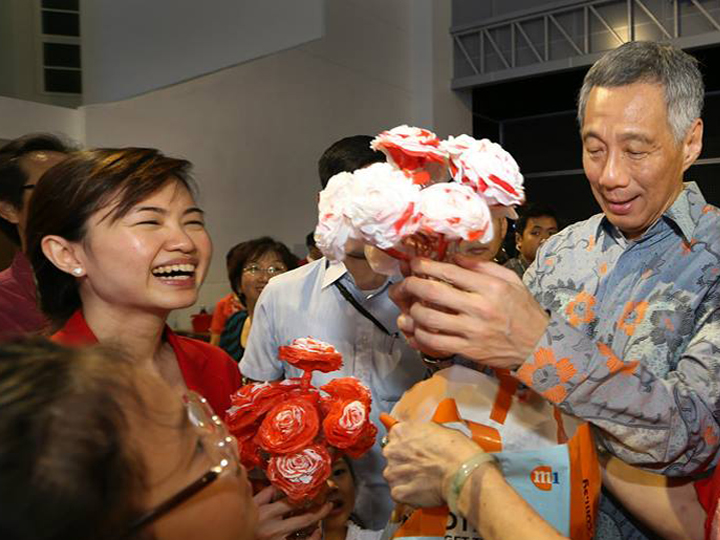 But Marine Parade GRC MP Tin Pei Ling might have to do just that!

Already 9 months into her pregnancy, Ms Tin has been seen walking the ground and going on house visits in MacPherson, her “di pan” (territory).

Now with MacPherson carved out from Marine Parade as an SMC on its own, can Ms Tin step up and win the hearts and crosses of voters?

If your memory serves you well, you’ll remember Ms Tin as the brash, clueless new face in Marine Parade from General Election 2011.

Famous then for her Kate Spade antics and foot-stomping, “I don’t know what to say” interview reply which was caught on tape, she even appeared to be a liability, with Emeritus Senior Minister Goh Chok Tong even saying she could affect the PAP’s chances.

Elder Goh even played a prank on her on Facebook, saying:

“Young Pei Ling has been traumatized. Saw her yesterday with trauma specialist, Fatimah. While doc examined her, I observed. Her initial hurt n pain have subsided. Gave her clean of health. In the process, discovered steel in her. She will grow in strength.” (with Fatimah being the ot PAP’s other Marine Parade MP, Dr Fatimah Lateef ).

However, Ms Tin has found favour in recent times, with Prime Minister Lee Hsien Loong even offering her high praise last year in a Facebook post:

“In the last general election I sent Tin Pei Ling, our youngest candidate, to MacPherson, which has many old residents. I was confident that she could establish rapport with the uncles and aunties, and serve residents well.

The last three years have proved this so. Pei Ling and her team of activists and volunteers have worked hard. Some were sceptical at first, but she and her team have won over many hearts and minds.

The refreshed MacPherson Community Club I reopened yesterday is one example of their work.

A big thank you to Pei Ling, the GRLs, and volunteers for continuing to build on the good work of former MPs Mr Chua Sian Chin and Mr Matthias Yao, and the pioneer activists in MacPherson! – LHL”

So the question remains: Can Tin Pei Ling cut it, if left to fight for an SMC all by herself?

Then again, will the Workers’ Party smell blood and send Yee Jenn Jong, who’s just said “bye bye love” to the now-defunct Joo Chiat SMC, to take her on?