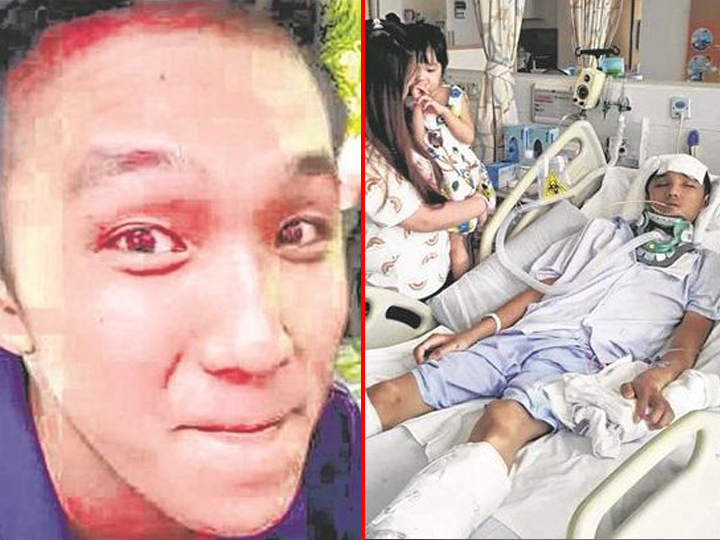 She thought it was just fatigue, and later on found it she pregnant with her second child.

But it’s unclear whether 23-year-old construction site foreman Lee Jia Jun will wake up from his coma to see his baby.

The Malaysian national was riding his motorcycle from his home in Johor Bahru to his workplace in Woodlands, when he is believed to have been hit on the head by fallen tree branches along Admiralty Rd.

That incident took place last month, and Lee has been in a coma ever since.

His wife found out 2 weeks ago that she was pregnant.

“When I heard the news, I went to tell him straight away. I want him to be strong and wake up.”

Mrs Lee said that that her pregnancy brought on mixed feelings given the circumstances.

“This was supposed to be good news, but how can I be happy seeing him like this? I had been considering whether to have a 2nd child for some time. He said it didn’t matter whether the child was a boy or a girl, so long as my daughter had a playmate.”

Lee’s family wants to send him back to his hometown in Ipoh for treatment to save costs.

However, they are worried that his body might not be able to withstand the 8-hour journey by road.

In the 1 month he has been hospitalized, he has racked up S$84,000 in treatment fees.

His company will foot half the bill, while his family will pay the other half.

They are finding ways to save money to make the payment.

Lee came to Singapore to work 4 years ago when he was just 17 years old, and was earning S$1500 a month.

His wife is desperate for him to regain consciousness.

“I just want him to wake up. I don’t care whether he is paralysed or blind, as long as he wakes up. After that, he can slowly start over.”