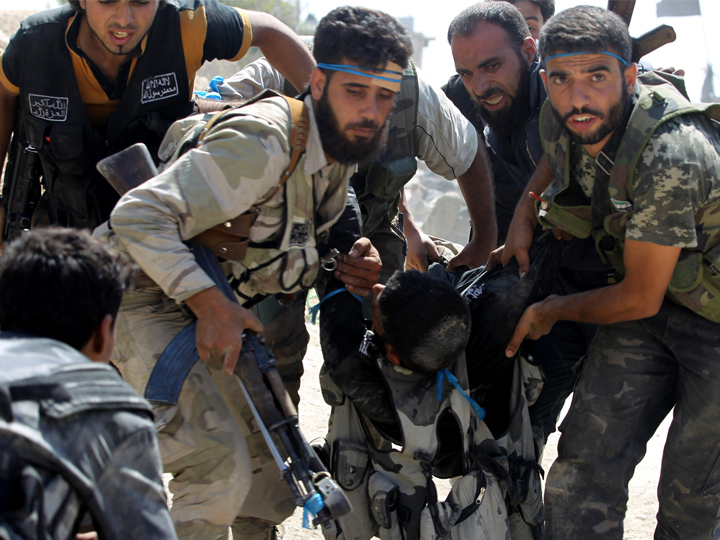 Two AETOS policemen have been arrested under the Internal Security Act for terrorism-related offences, with one of them planning to join Syrian rebel forces to fight the Syrian government.

Muhd Khairul was working as an outrider at the Woodlands checkpoint, in charge of performing traffic enforcement duties.

The Sunni Muslim became radicalised in 2012 and was making plans to travel to Syria to join the Free Syrian Army (pictured above) to kill Shi’ite Muslims and fight the Syrian government.

“Khairul perceived the Syrian conflict to be a “holy war” in which he was prepared to die in battle as a “martyr” and receive divine rewards.”

“At the point of his arrest, Khairul was still interested to join FSA or any other militant groups operating in Syria and engage in armed violence there. His readiness and proclivity to resort to violence in pursuit of a religious cause makes him a security threat to Singapore.”

Muhd Khairul’s colleague, Rizal, was working as an armed officer in charge of general security duties at the Woodlands Checkpoint.

The MHA said he knew about his colleague’s plan to travel to Syria to fight and instead of raising the issue with the AETOS management or proper authorities, he suggested to Muhd Khairul various ways to get to Syria and die there as a ‘martyr'”.

The MHA said Rizal he did not share the same desire to take part in armed violence, but “as an auxiliary police officer, he should have been aware of the prevailing terrorism threat and his failure to dissuade Khairul and report him to his superior officer was a serious lapse of judgement.”

Rizal has been placed on a restriction order that curtails his movements and activities.

What’s worrying is how the family and friends of Muhd Khairul knew he of his plans but refused to out him to the authorities.

“In the case of Khairul, several relatives and friends knew of his intention to fight in Syria, but none of them came forward.”

Minister-in-charge of Muslim Affairs Yaacob Ibrahim said his parents knew of his intentions, but didn’t take him seriously.

The MHA has urged persons who know that their friends or family members have been radicalised to report them to the authorities.