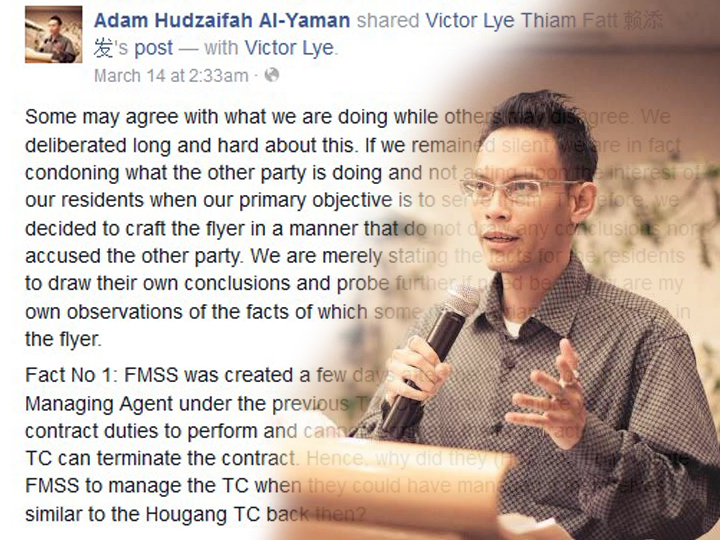 A PAP activist involved in the distribution of flyers alleging that AHPETC leaders mismanaged town council funds has defended the flyer drop.

Adam Hudzaifah Al-Yaman said that it was important that Aljunied GRC residents were fully aware of the facts, so they can make informed choices.

“AHPETC residents inadvertently overpaid FMSS by $6.4 million! With so much overpayment, it was even reported that How and Low managed to buy two condo properties after the GE.”

Rounding up his statement, Adam appears to encourage residents to probe AHPETC leaders, and “if they choose to, possibly bring about a civil action of breach of fiduciary duty against them.”

A Redwire poll of 60 Aljunied residents found that 65% disapproved of the flyer drop, with 20% supporting it and another 15% preferring to remain neutral on the issue.

“Some may agree with what we are doing while others may disagree. We deliberated long and hard about this. If we remained silent, we are in fact condoning what the other party is doing and not acting upon the interest of our residents when our primary objective is to serve them. Therefore, we decided to craft the flyer in a manner that do not draw any conclusions nor accused the other party. We are merely stating the facts for the residents to draw their own conclusions and probe further if need be. Below are my own observations of the facts of which some may overlapped with those in the flyer.

Fact No 1: FMSS was created a few days after the GE ’11 when the then Managing Agent under the previous TC, CPG, had two more years of contract duties to perform and cannot terminate their contract. Only the TC can terminate the contract. Hence, why did they (How and Low) create FMSS to manage the TC when they could have managed it themselves similar to the Hougang TC back then?

Fact 2: FMSS was majority owned by How and Low and not employees of FMSS as many had that impression. Hence, whatever money that flows into the company, flows directly to them. Why have they chosen not to disclose their accounts and be transparent? Why do they not disclose their related party transactions which is required under the TC act?

Fact 3: The handover from CPG to FMSS was properly documented and signed and they were even given a farewell party. Why was it then that the TC keep harping on the handover issues?

Fact 4: There is no assurance given by their own Auditors nor the AGC that their financial numbers are accurate and reliable and therefore, we don’t know whether any monies are lost as AGC did not conduct a full detailed audit. Such opinions have never been found on any government or its related agencies.

Fact 5: AHPETC residents inadvertently overpaid FMSS by $6.4 million! With so much overpayment, it was even reported that How and Low managed to buy two condo properties after the GE.

Fact 6: As the TC are governed by a separate act and there are no provisions that says that their actions are a criminal breach of trust, residents can however probe them and if they choose to, possibly bring about a civil action of breach of fiduciary duty against them.”