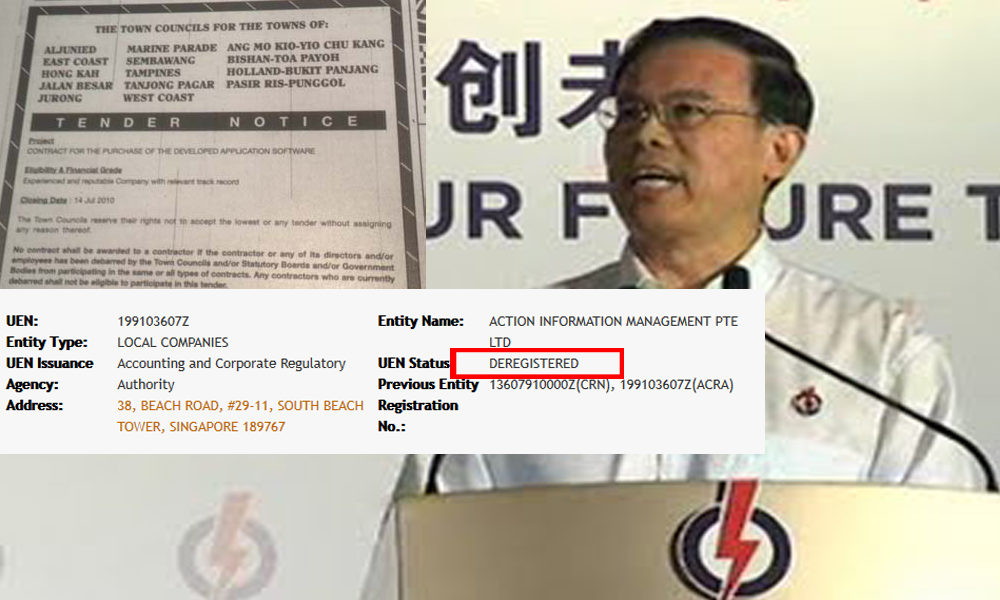 This, especially after the next tender for the development of the software required firms to have S$1.5 million in paid-up capital before they could bid.

AIM, a company run by former PAP MPs, had a paid-up capital of S$2 when it bought over the software.

The company paid S$140,000 for the software which cost town councils about S$24 million to develop.

AIM then leased the software to all PAP town councils for a fee, but declined to lease it to the Workers’ Party in 2011 after it won in Aljunied GRC and took over the then-Aljunied Town Council,

As a result, the WP needing to develop its own town council management software and import data of all residents into its own system.

Strangely enough, the last tender for the development of town council management software for all PAP town councils in 2013 was much stricter with firms.

The tender required firms to have an annual turnover of at least S$10 million and a paid-up capital of at least S$1.5 million, under the S9 financial grade of the government supplier registration guidelines.

It clinched the 7-year contract for S$16.8 million.

Questions continue to be raised as to whether the sale of the town council management software to AIM in 2010 was against the public interest, and why the company’s S$2 paid-up capital status did not raise any red flags.

When queried about the matter, then-Minister for National Development Khaw Boon Want said on 13 May 2013 that AIM was “not any ordinary $2 company. It was set up by the PAP…That is the difference between AIM and any other “$2 company.”

A check with the Accounting and Corporate Regulatory Authority of Singapore shows that the AIM has been de-registered, with its last Annual General Meeting (yearly gathering of shareholders) held in May 2015.

At the time when it acquired the town council software, AIM was run by 3 directors who were former PAP MPs and its mailing address was the same address as the PAP’s headquarters in Bedok.

It employed 2 part-time staff, and oddly enough for a computer programming and consultancy company did not have its own website.