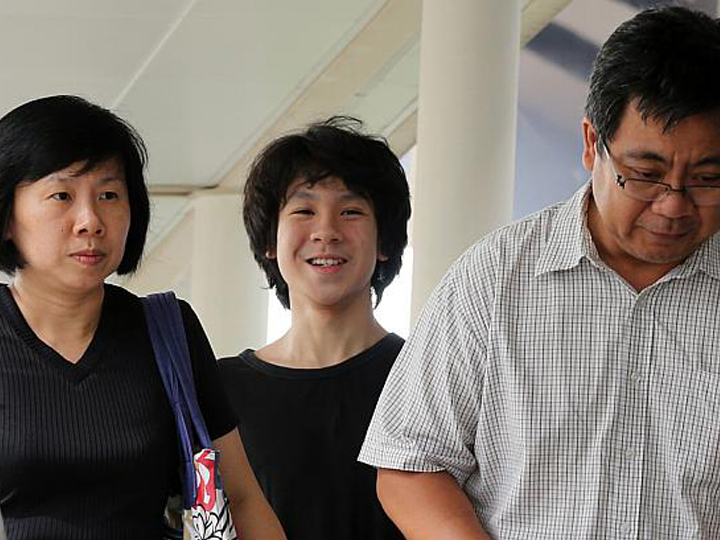 Mom to kid: If you fall and break your leg, don’t come running to me and crying.

Roll over Roy, it’s Amos Yee’s turn to have a bite at the crowd-funding cherry.

The 16-year-old says he is running out of money to buy food, much less pay his legal bills.

He’s asking for help to top up the S$70 he claims is all that remains in his bank account.

He promises he will not run away with your donations, which you are asked to deposit directly into his POSB bank account.

Here is Amos Yee’s crowd-funding appeal, which has been posted on blogging platform, WordPress.

Well, as many of you know, I (Amos Yee), after uploading my video ‘Lee Kuan Yew Is Finally Dead!’ on Youtube:

have been charged for intending to promote ill-will amongst religious groups (Which has the highest sentence of up to 3 years in prison) and intending to create material that distresses the community.

And I attained a 3rd charge for circulating obscene imagery with my picture of Lee Kuan Yew buttfucking Margaret Thatcher, which was uploaded just 3 hours before my arrest:
https://amosyee.wordpress.com/2015/03/28/lee-kuan-yew-buttfucking-margaret-thatcher/
I had been arrested and put in a cell for 2 days, but am now currently out on a bail of $20000.
News about my case has had a large following, both locally and internationally:
http://www.newyorker.com/culture/cultural-comment/the-arrest-of-a-teen-aged-youtube-star
And the public outcry continues: hate mail, discourse on the nature of freedom of speech in Singapore, petitions for me to be acquitted, etcetera, and would probably escalate even further when the trial happens. It has all been, thoroughly stimulating.

But of course, participating in every legal battle, reality hits you hard, I require money.

I’ve already saved up a considerable amount of money by insisting that I’d only have lawyers who are able to represent me, pro bono. But unfortunately, there is still the inevitable cost of court fees, bail money all the nitty-gritties that makes a trial notoriously expensive, lawyers excessively rich and something that the common folk would never wish to touch with a 8-foot pole. However in my case, being the highly subversive, iconoclast that I am, these would probably be inevitable. I’ve estimated that I require and aim to raise $30000 to continue indulging in this endeavor adeptly.

Right now, my budget for food has always ran out, I’m currently living off the $70 left in my bank account, and the food that people graciously provided to me free-of-charge, because they are fans. So it would be relatively apt to infer that I probably am unable to afford the items and resources that surrounds a court case. And after inquiring, neither do my parents, nor are they willing to pay for it…

Therefore, since I require help and since many people have displayed a fervent interest(in which I cannot express the extent of my gratitude with meagre words), I humbly open up this avenue, for you to donate, and assist in my needs in court

Locally, you can directly send your donations via my bank account number: POSB SAVINGS 124-91889-8

But for all my international buddies out there, you can send it via my paypal account to the email: brainandbutter@gmail.com

Now of course keep in mind, that though I give you my assurance that I won’t, there is the possibility,that I might pocket that money for myself (akin to the supposed actions of the PAP) and buy myself a cup of Jelly. Therefore, donating this money is in the lieu of a trust that I will not use it for my own personal gains, or that you simply don’t mind.

Take note that this crowd fund is exclusive from the avenue in which you can support me, as a content-creator. This fund is solely to assist in my legal fees, but if you would like to support the work of my artistic endeavors (Which having the emotional catalyst of the case, scripts and writings behind-the-scenes has never been so rife), then I direct you to my Patreon Page : http://www.patreon.com/amosyee, as the appropriate platform for you to do so.

So conclusively, I hope that you provide your support and donations, and I cannot express my absolute gratitude for writing, donating, supporting, and discussing, creating a highly stimulating and exceptionally exciting environment, for me to continue playing, the game of thrones.

With lots of love
Amos Yee