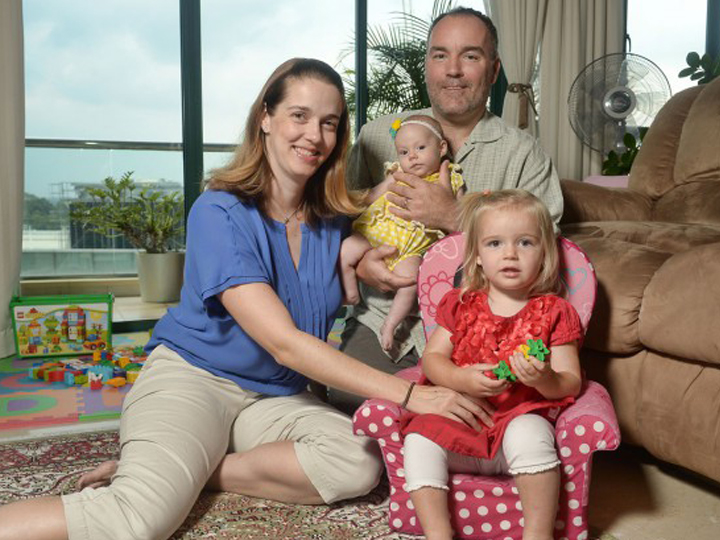 This ang moh couple makes a combined income of S$29,000 a month, and still they find it tough living in Singapore – known as the “Most Expensive City in the World”.

48-year-old American Cyril Letzelter is a corporate pilot, while his 35-year-old wife, Jennifer, is an engineer. The couple have two daughters who are 3 months and 23 months old. The family moved here in November 2013.

Mrs Letzelter apparently took up a job in Singapore because without additional income it would be difficult to save enough for retirement and their children’s schooling.

They couple used to own 2 cars back in America, but they don’t own a car in Singapore. That’s because of the high S$80,000 price tag compared to one in America which would cost S$27,500. They rely on public transport and taxis here to get around.

Meanwhile, the family rents a 150 sqm apartment in Thomson for S$4400 a month. Mr Letzelter’s says his previous house near Denver, Colorado was 610 sqm, while his wife had a house near Boston that was about half of that size. He laments that he could get a very nice car and 2 houses back in America for what he has to pay in Singapore.

They also spend S$2400 a month on groceries – 3 times of what they usually spend back in America –as they pay extra for imported food products because they’ve found it hard adjusting to local food.

“Grocery shopping is shockingly expensive. We try to shop at FairPrice because it’s cheaper, but oftentimes we pay a lot of extra money to get products that make us comfortable.”

Mr Letzelter says when first joined his company here in 2013, he was getting paid about 40 per cent more than he was in the US, and this this has since narrowed to 20 per cent.

He said that it’s getting tougher for foreigners to draw high salaries in Singapore.

“Far fewer expats are getting expat contracts, with many getting only local contracts, and the salaries are not as high.”

Mr Letzelter says that he moved to Singapore because both him and his wife are “adventurous people and we were looking for a place to raise kids that could provide them with a unique culture.”

The family had initially planned to live here for 10 years, but they are now considering moving back to America.

A breakdown of the Letzelters living monthly living expenses: