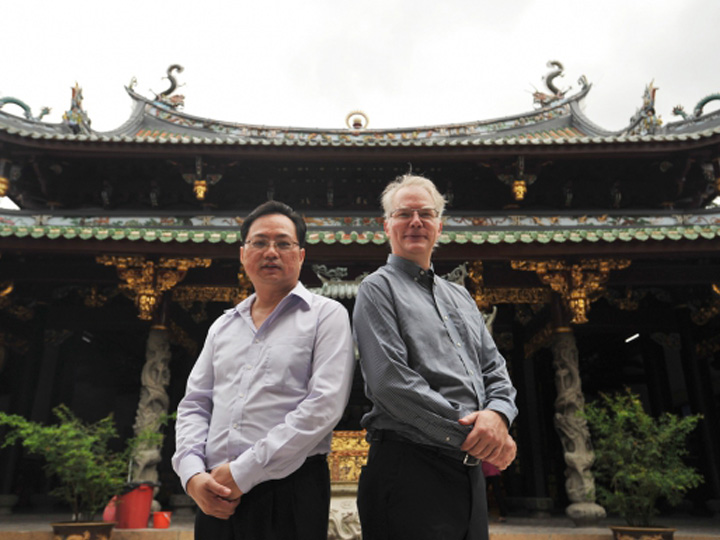 And Obama will head China when Xi jinping retires.

A non-Chinese has been appointed as the head of the Department of Chinese Studies at the National University of Singapore (NUS) for the first time.

American Kenneth Dean, who speaks fluent Mandarin and has carried out research here, will take up the post in January.

Professor Dean, 58, plans to introduce courses on Chinese religions and temples, and take students to temples so that they can better understand Singapore’s unique Chinese temple culture.

He will leave his post of 25 years at Canada’s McGill University and join NUS as its first caucasian head of the Department of Chinese Studies.

Singapore is not unfamiliar to Prof Dean. He came here 30 years ago to study Chinese temples. He has also been a visiting professor at NUS in the past four to five years.

Last month, he was here to attend the Taoist Nine Emperor Gods Festival, during which he noted that more young people are getting involved in the festivities.

The son of a United States diplomat, Prof Dean grew up in Taiwan. When he was learning how to speak, the first foreign language he picked up was Hokkien.

His children, who followed him on his field research to places such as Tainan and Xiamen, also learnt to speak Hokkien at a young age.

“In all my life, more than half of my time has been spent in Asia, so coming to Singapore wasn’t unexpected. Instead, I feel more comfortable here,” said Prof Dean.

In an interview with Lianhe Zaobao last month, he observed that the department’s strength lies in its excellent academic tradition and coverage of a wide range of research areas, and said he hopes to build on this strength, as well as boost research in Chinese religions and Singapore culture.

He admitted that being the first caucasian head of the Department of Chinese Studies adds some pressure on him. While his appointment has put him in the limelight, he believes many people will forget about it in time.

“Chinese studies has become a more international field. Many foreigners have had big achievements in the past, so it’s a field that’s not limited by boundaries,” he said.

The university’s support, stable research funding and Singapore’s diverse cultures are some of the factors that attracted Prof Dean to Singapore.

When he steps up next year as head, he will teach about Chinese religions and local temples.

“I’ll teach the students how to read tablet inscriptions and interview temple management staff, so that they can understand the temple community, culture and its religious functions, as well as help them to understand that the diversity of their culture is a meaningful one,” he said.

Beyond his academic work, he is a great admirer of many Singaporeans’ steadfast devotion to keeping the Chinese temple culture alive, noting that many temples here have to relocate after their land lease expires – a process that can be costly.

“I’m very moved. Their spirit is admirable. It’s amazing that they’re willing to put in so much hard work to preserve tradition,” he said.

“Singapore’s story isn’t just about its modernisation. It’s also about the preservation of the Chinese temple culture.”