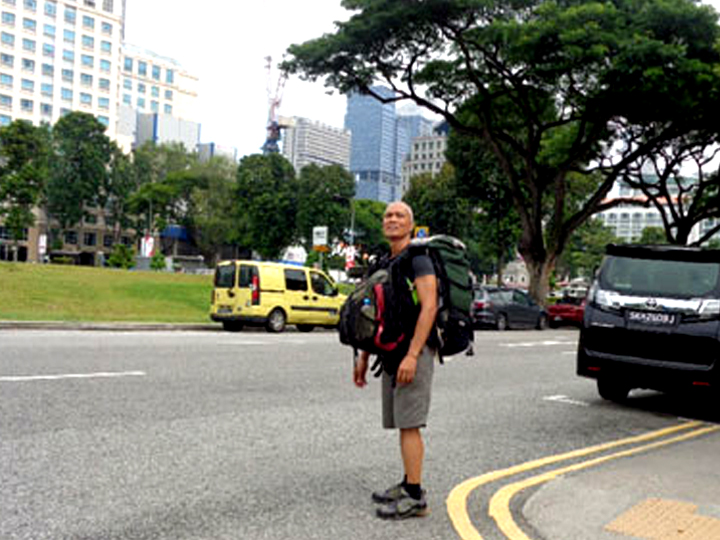 It seems counter-intuitive – why would anyone be happy to get detained by customs officers for 2 hours, let alone 20 mins?

But this ang moh traveller who blogs at The Lone Rider, explained that it’s the treatment he received at the hands of officers that led him to have a deeper respect for our authorities and our country.

Instead of kicking up a hissy fit, he chose to behave more like a man than a gu niang!

“From Malacca, I wanted to proceed to Singapore for a few reasons:

-I lost my phone in Malacca and needed to get another one
-I needed a direct flight to Davao, Philippines and Singapore is the only international destination connecting Davao
-It would be good seeing Eunice again, a strong yogini I met in Bali
-I love Singapore having lived a magical 30 days here a year ago

The Snag
The bus trip from Malacca Sentral Bus Terminal to exiting Malaysia was painless and went smoothly like clockwork. However, at Singapore’s Immigration and Checkpoints Authority (ICA), it hit a snag. For the life of me, I completely forgot to book a hotel and an onward flight, although I was spending the last few days looking for the cheapest deal.

Detained
Not surprisingly, I was detained for 2 hours causing me to be left by my bus. Although unnerving, I welcomed the experience – because it’s a new experience. I wasn’t nervous. There was nothing to be nervous about – I didn’t steal, lie or kill. I just arrived with no booking. That’s hardly a crime. After explaining myself to the immigration officer, I was immediately released. They’re smart and quick to tell that I was not a threat in any way. I took another bus that brought me to Bugis District where I had to start the new challenge of finding a cheap hotel.

Change of Feelings?
But I would like to focus on what happened at Immigration. I returned to Singapore because I sincerely admire and love this country. It’s the one destination that impressed me the most in Southeast Asia. And now, I get detained and had to scurry for a bus to the main city, having lost precious time. How do I feel now about Singapore?

Respect and Admiration
It may seem odd, but this incident only fortified my admiration and respect for the country and the people who run it.

I didn’t do my job. It was really my bad and had nothing to do with them. They were just doing their jobs.

Being non-compliant to their rules, I was vulnerable. In other countries, the officials would have applied the ‘squeeze’ to pressure me into bribing them. Or, perhaps play God and power trip on me. But ICA was respectful the entire time, even managing a pleasant smile at times. There was absolutely no power play. They were the consummate professionals.

As punishment, they detained me for 2 hours and made the bus leave without me as a consequence. Honestly? I think my slap-on-the-wrist punishment fits the low-level crime. Again, they could have given stiffer penalties, like an overnight jail time or be sent back to Malaysia. They could have made that as policy. But no, they just gave me enough punishment to teach me a lesson. In fact, if I were in their shoes and I have to be fair but act from a position of power, I would have done exactly the same – teach the guy a lesson without brutalizing him.

Ending Thoughts
Working at ICA is probably a thankless job – you bear the brunt of everyone who has been detained, delayed, interrogated, let alone whose contraband has been confiscated or those committng illegal entries. All this aggravation when you’re just doing your job. Compare this in sharp contrast to a country club manager who ensures people are having the best times of their lives – they get thanked, gifted, friended, invited to be hosted when visiting the traveler’s hometown, etc., when just the same, they were just doing their jobs. Something to ponder about.

This experience certainly adds dimension to Singapore for me – an unpleasant but needed one. The more I know about Singapore, the more I admire it. I can’t wait to see what else is in store for me.”