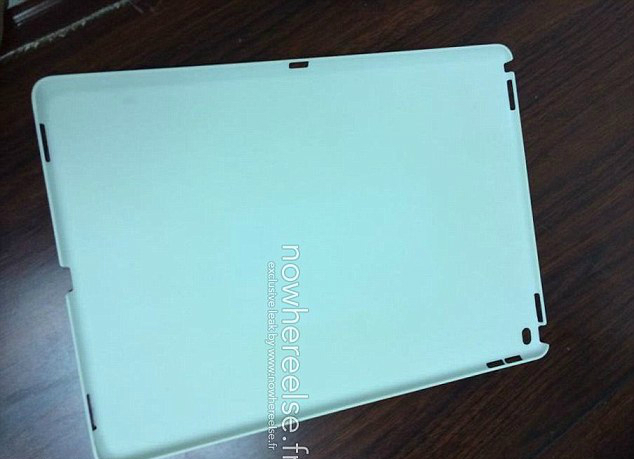 A leaked design for a case has revealed more details of Apple’s much rumoured iPad Pro tablet.

The giant tablet is expected to have a large screen over over 12 inches.

It could go on sale within months, and help reinvigorate iPad sales.

According to French blog nowhereelse.fr, the case is from a ‘reliable source’ which has previously given them advance details of Apple’s product, which the firm is notoriously secretive about.

‘The iPad or iPad Air Plus Pro should be unveiled sometime between the months of March and April,’ the site claims, and ‘would be equipped with a screen measuring from 12.2 to 12.9 inches diagonally,’ it says.

The tablet is also expected to have four speakers, and could even featur two charging ports allowing it to remain plugged in when in either portrait of landscape mode.

It comes weeks after an image was leaked that appeared to be a mould for the device.

The photo was reportedly taken at Apple manufacturer Foxconn’s factory in China and is said to measure approximately 12 inches high by 8.7 inches wide.

It follows a leaked sketch from last week that claimed to show one corner of the so-called megapad, iPad Pro or iPad Air Plus. 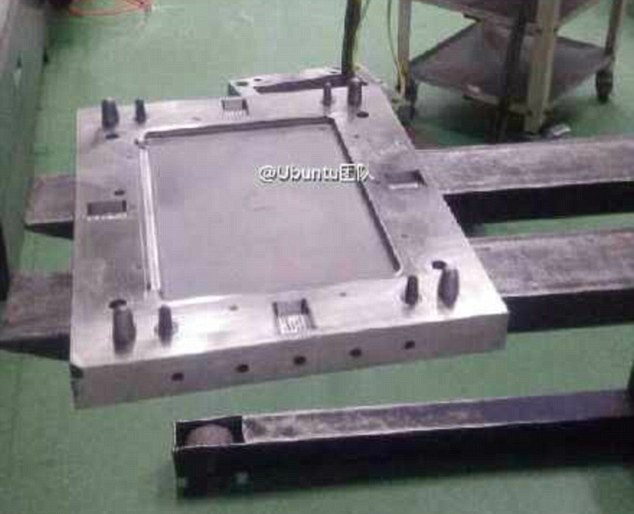 The latest image was posted on Chinese social network Weibo.

If the rumours are true, the iPad Pro would be significantly larger than the current iPad Air 2.

This would put the Pro on par with Samsung’s 12.2-inch Galaxy Note Pro, which launched in February.

Last week’s leaked sketch, also reportedly taken by an employee who works at Foxconn seemed to show a grille that will also boast four speakers for stereo sound.

The image was released by French website Nowhere Else, which has previously leaked details from unannounced smartphones and Apple gadgets which proved to be true, citing a Foxconn source.

The source said that initial testing for the iPad Air Plus was stopped in the summer and Apple’s suppliers will soon start mass production of the tablet.

The sketch suggests that the tablet will look similar to the iPad Air 2 in design, with rounded corners and the same standby button, rear camera, microphone and volume buttons placement.

However, seemingly confirming rumours that the larger tablet will offer stereo sound, there appears to be a speaker grill on the top of the shell.

Japanese magazine Mac Fan claimed in December that the iPad Air Plus will also feature a much faster A9 processor and is set to launch between April and June.

Bloomberg and other publications reported that Apple was planning on releasing the device sometime in early 2015, while a recent report from The Wall Street Journal said the Californian firm had postponed mass production of the larger iPad from December 2014 into next year as suppliers struggled to meet demand for the iPhone 6 and 6 Plus launch.

These designs showed the gadget as just 7mm thick, but the size of the screen is uncertain, with rumours suggesting measurements between 12 inches and 12.9 inches.

The first suggestion of a supersized tablet came just weeks after claims that the large screen size of the iPhone 6 Plus was impacting on iPad usage.

The release of Apple’s iPhone 6 Plus means there is now only a 2.4-inch difference between the size of the phablet’s screen, and the display on its iPad mini.

Analysis has revealed that as phones become larger, more people are using them for watching videos or reading – making their tablets almost redundant.