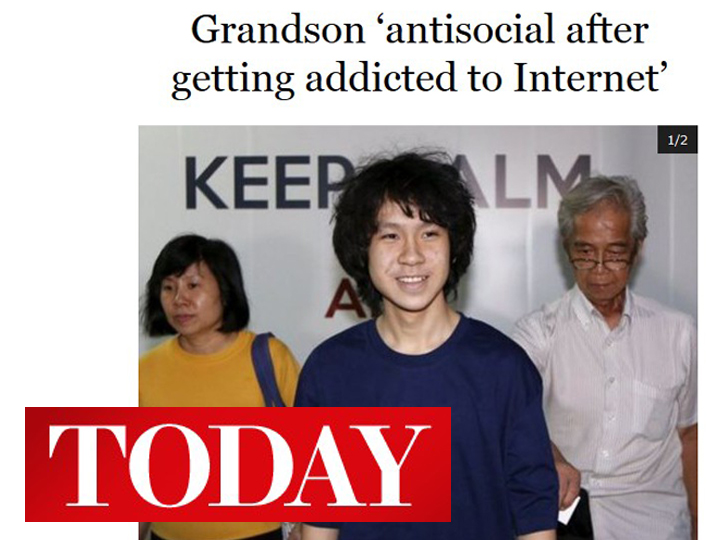 Was talking to a kopitiam uncle one day. He said:

“When you tell grandmother stories, of course you kena play punk lah. What you expect, when you nia nia drag people’s 76-year-old Ah Ma out and make her do interview. Some more, Ah Ma already said she is “very sad”, then lan lan want to send one chio bu reporter down and kong jiao wei. As though reporters don’t know she is sad. Grandson go jail, which grandma not sad? Lucky already that she never cow beh and take broom.”

I think what the kopitiam uncle missed, maybe because we already had two beers, was that this Amos’ Ah Ma TODAY story wasn’t purely about Amos Yee, or Ah Ma.

It was a veiled attack to snipe internet factions, and make the masses believe that the internet is full of harmful and subversive elements.

Ah Ma’s Shunfu home is 5 minutes down the road from MediaCorp  – going by the map, it’s even within walking distance.

And so our TODAY friend decided she would trot over to borrow a knife from grandma, just so she could take a stab at her grandson, and the internet?

TODAY appears very unwilling to stick to discussing the issues at hand when it comes to Amos Yee:
-did what he raise warrant a knock on the door from the cops
-what were his motivations, and why does he continue to be so belligerent
-as a teen, was he led down the garden path by subversive groups?

Issues like these and more, which do not resort to personal attacks on a child, and grandmother stories.

Was TODAY also trying to scare the hell out of the Catholic Church?

Well, it succeeded in giving the church enough of a fright that it released a statement saying it didn’t excommunicate Amos Yee.

A statement over a young boy who doesn’t even go to church anymore – that’s the extent of fear and doubt state media provoked.

Was there a need to bring up religion, as a means of smearing either the teen or the church?

At least that’s interesting, investigative, and adds value to a tall tale.

TODAY just falls flat using its gutter journalism antics on a 16-year-old who has already been convicted.

No wonder the child is retaliating.

Amos Yee ‘antisocial after getting addicted to internet’: Grandmother

SINGAPORE: Teen blogger Amos Yee was a “normal” child who became antisocial after getting hooked to the internet, his paternal grandmother said on Tuesday (May 12).

She said Amos started to devote much time to his computer when he entered his teens. “He rarely goes out with his friends … When I asked why he spends so much time on the computer, he told me that there are a lot of things to learn on the computer,” she said at the family’s flat in Shunfu Road in Bishan.

Mdm Chung spoke to TODAY before she was made aware of the court’s verdict. The court on Tuesday found Amos guilty of two charges, one for making offensive or wounding remarks against Christianity, and another for circulating obscene images.

In court last week, defence lawyer Alfred Dodwell said Amos has been on social media since he was eight, and engaging online is “equivalent to drinking water” for the blogger, who has stopped schooling despite getting good results in the O-Levels.

Mdm Chung, who has been living with Amos and his parents since he was in Primary 1, said: “I am very sad. I hope he will change for the better.”

Asked about Amos’ relationship with his parents, Mdm Chung described it as “normal”. When approached outside the courthouse, Amos’ father, Mr Alphonsus Yee, said he had no comment on the verdict. The teen’s mother, Madam Mary Toh, declined to speak to reporters.