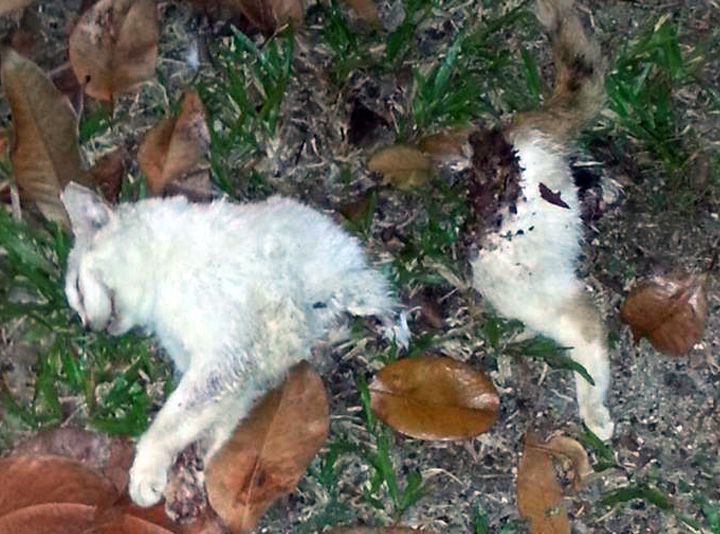 Probably not the best time to joke about pussy, cats

Photos of a cat whose body was slashed into half at Marine Crescent has sparked condemnation from animal activist groups, but latest findings indicate the cat’s death may have been caused by a pack of dogs, according to the Singapore Society for the Prevention of Cruelty to Animals (SPCA).

Photos of the cat had garnered close to 900 “shares” on Facebook as of Wednesday (Oct 29), leading to calls for information on the perpetrator of the act. But the SPCA, which picked up the carcass of the cat on Tuesday night after receiving a tip-off from an informer, said in a Facebook post that animals, and not humans, were the likely cause.

“Our vets have found the cat’s death to be due to non-human factors, and instead very possibly the action of a dog, or a pack of dogs,” said the SPCA.

It has referred the case to the Agri-Food and Veterinary Authority of Singapore (AVA) for a post-mortem and further investigations, and urged that “comments be withheld until conclusive findings are derived from the post-mortem”.

The society said it has previously worked on two cases of cats being killed by dogs in this neighbourhood, and cautioned cat-owners to keep their pets indoors at all times as a safety measure.

The Cat Welfare Society (CWS) said a volunteer mediator in the vicinity was alerted to the incident on Tuesday night. Initial images of the cat suggested a case of abuse or attack by another animal, said CWS. “If abuse is confirmed by autopsy, we will call for volunteers to canvas the area for witnesses and alert other residents.”

Animal Concerns Research & Education Society (ACRES) issued a call for more information on the person who committed the act. Said Chief Executive Louis Ng: “It is alarming that someone has done this heinous act of cruelty and this person must be brought to justice. We hope that members of the public will come forth with any information leading to the arrest of this person.

“If this person is caught, he or she should be prosecuted to the fullest extent to send out a strong deterrent message that animal cruelty will not be tolerated in our society.”

Cat Welfare Society said members of public speaking up would serve as a deterrent to a repeat of the incident. “As a preventive measure against possible abuse, residents must be extremely vigilant about persons acting in a suspicious manner around the community,” it said. “If abuse is witnessed, then intervene to stop the abuse, call the police to apprehend the abuser and provide a full account of what you observed.”