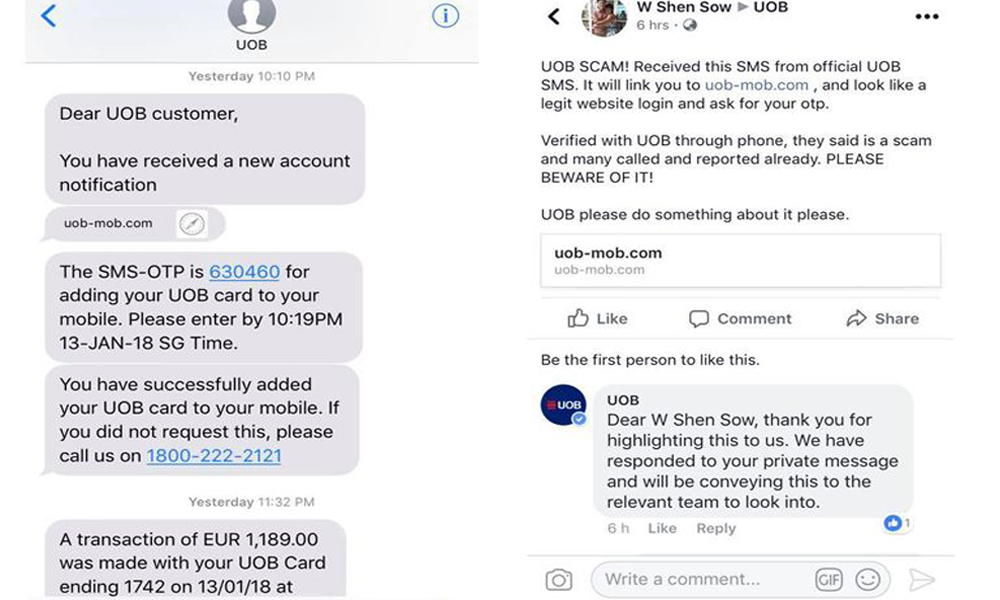 Police have warned that scammers are posing as United Overseas Bank and running a phishing scam to extract personal details and credit card details.

The victims responded to an SMS sent by scammers which was made to appear like it was sent by UOB.

The SMS sent to the victims informed them of a new account notification and included a link uob-mob.com, and invited the victims to click on it.

Victims were sent to a website resembling the actual UOB site.

There, they were asked to enter their personal information and credit card details such as their credit card number, date of expiry and card verification value.

Meanwhile, the scammers had downloaded the UOB Mighty app – a legitimate app by the actual bank.

They then used the app to enter the details provided by victims.

The victims received a One-Time Password (OTP) on their mobile phones, which they were prompted to key into the website.

They later received SMS notifications informing them about foreign transactions made on their credit cards.

Police say that 7 police reports involving such a scam were received in Jan 2018 alone.

The public has been warned to be careful when disclosing their personal information over the internet, make sure websites they are directed to are legitimate websites, and report all fraudulent credit card transactions to their banks as soon as possible.