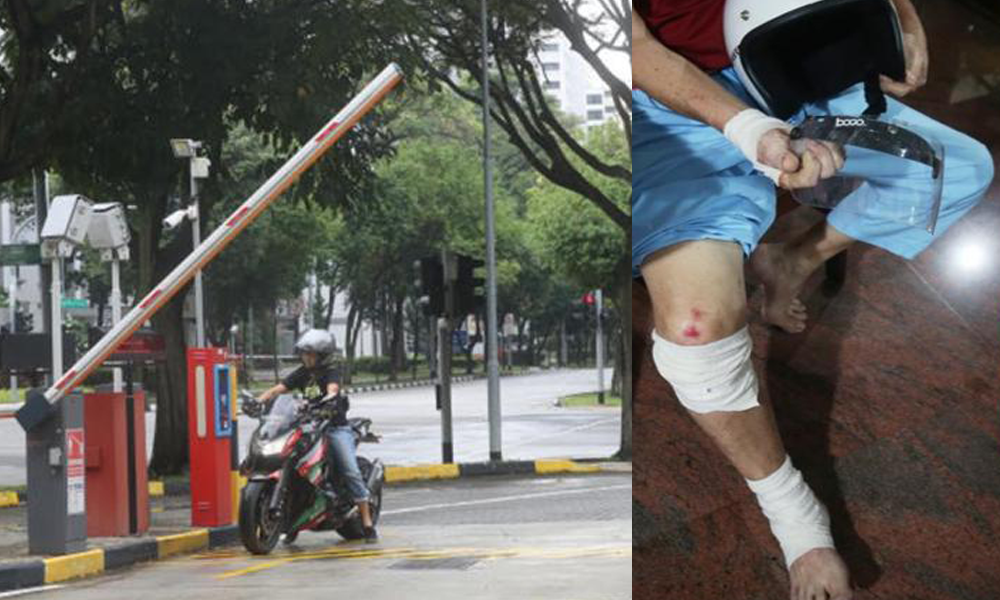 They teach you in school to “look left, look right” when crossing the road.

But when riding through a carpark gantry, it’s sometimes best to look up as well!

65-year-old technician, Tan Ying Xiong, got a rude shock on Tuesday morning (22 May) when a HDB carpark gantry barrier crashed down on him just as he was exiting the carpark.

The incident took place at the open-air carpark at Block 659B Jurong West St 64 at about 7.30am.

Tan, a Jurong resident for the past 18 years, said he rode his motorcycle towards the gantry, waited for the car in front of him to drive off, before moving forward.

After his motorcycle’s IU was scanned and the gantry barrier lifted, he rode forward to exit the carpark.

That’s when the barrier suddenly crashed down on him.

“I had no time to react when I felt a metal rod fall on my head.”

Tan said the impact threw him off balance and he fell on his right side.

His motorcycle fell on him, pinning him to the ground.

He looked around and there was no one in sight, but slowly he managed to fish out his handphone and call his wife.

Tan said he had been trapped for about 10 minutes when another motorcyclist and a pedestrian saw him.

They lifted his motorcycle, helped him to the kerb, and called for an ambulance.

Tan suffered abrasions to his right shoulder and leg.

He was sent to hospital and discharged the same day.