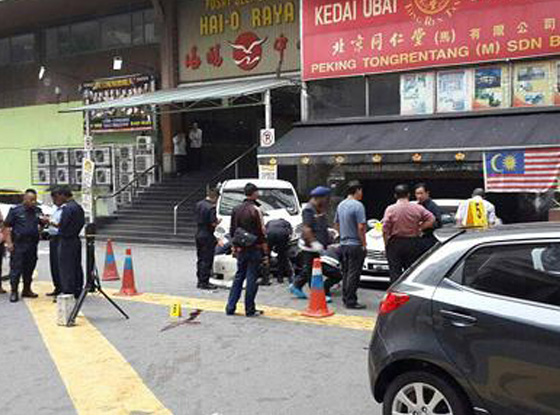 Accused by the West of harboring terror cells from the Middle East and under fire from its own citizens for failing to control crime, Prime Minister Najib Razak’s government was dealt a fresh blow when a bomb blast rocked the heart of Kuala Lumpur early on Thursday.

“It’s very worrying – the emergence of a new form of terrorism with no particular group identified or no known link with any political agenda,” Tian Chua, the Member of Parliament for Batu.

Saying it was too early to jump to conclusions on who could be the possible perpetrators, the Opposition politician urged the police to give top priority to the case.

“Hand grenades are not something easily available . How can criminals get access to such restricted material? Were such weapons smuggled in or stolen from the military?” said Tian.

At least 14 people were injured in the explosion in front of a pub along Jalan Bukit Bintang in the heart of the city.

According to The Malaysian Insider, police sources said a car jockey was seriously hurt and in critical condition.

“Police received a complaint at 4.25am and sent a dispatch to the scene to ascertain the damage.

“Initial reports indicate that a bomb had been thrown from the second floor of a building.”

According to The New Straits Times, policemen have surrounded and cordoned off the area in front of the residential and commercial complex.

Two grenades were used but only one had exploded. The other was found beneath a nearby car.

Police are believed to be investigating the backgrounds of all those injured in the blast to pinpoint the motive behind the attack.

The injured, 12 men and two women, aged between 20 and 42, were sent to Kuala Lumpur Hospital and Tung Shin Hospital.

“The injured included nationals from Thailand, China and Singapore. Some of them were pub patrons,” said one of the sources.

“Initial investigations reveal that two hand grenades were thrown but only one exploded.

“Shrapnel from the hand grenade caused injuries to passers-by,” the source added.

Four vehicles were damaged in the blast – a Toyota Vellfire, Toyota Camry, Mazda and BMW.

Police found the second hand grenade, which failed to explode, under the Toyota Camry.

“We believe this is linked to an underworld tussle.”

Malaysia was recently pinpointed by Israeli media as being one of the locations where Hamas terrorists were being trained for overseas attacks. Both Hamas (the Islamic Resistance Movement) and the Malaysian government have denied the accusations.

Nonetheless, there are fears that Malaysia has become a hotbed of extremism, if not hardcore terror activities.

Ayob Khan, the Special Branch assistant director for Operations & Counter Terrorism division, told AFP the group had visions of establishing a hardline Southeast Asian caliphate spanning Malaysia, Indonesia, Thailand, the Philippines and Singapore, and planned to travel to Syria to learn from ISIL. The plotters included professionals and two housewives.

Government critics have blamed growing extremism on Najib and his Umno party, accusing them of fostering an intolerant mentality among the predominant Malay-Muslim community by encouraging racial supremacy and religious bigotry.