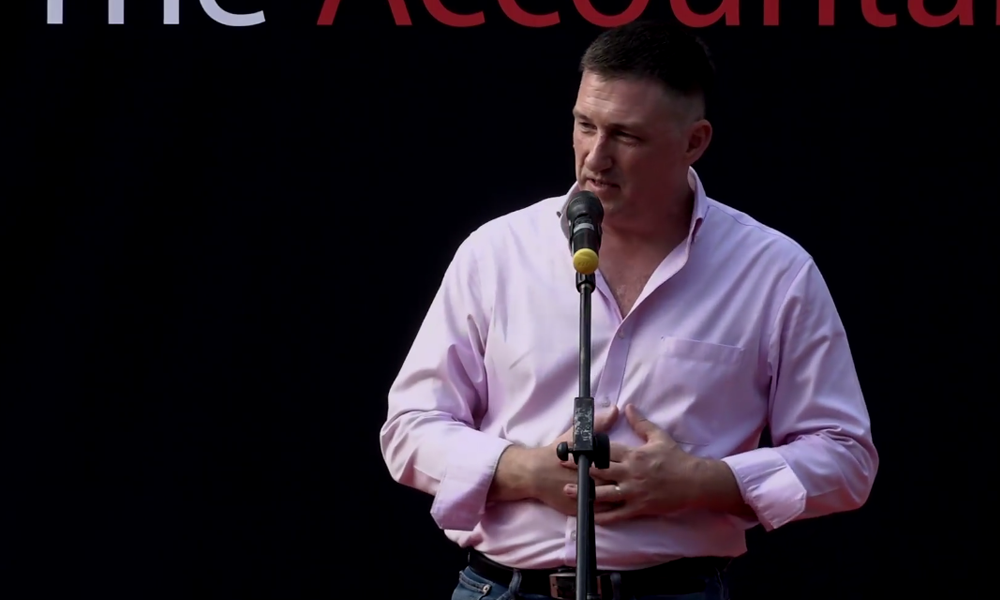 People’s Voice Party member Brad Bowyer took to the stage at the “Where is the Accountability” rally on Saturday (16 Mar), decrying the potential conflicts of interest in government due to inter-family relationships.

Giving the example of Bharti Airtel, a Temasek Holdings investment which has been widely viewed as a failure, Bowyer said that it’d be difficult for Prime Minister Lee Hsien Loong to check on the investments of Temasek Holdings because it’s run by his wife, Ho Ching.

“I’ve been married twenty years. If you had to go to your wife and question one of her decisions, how easy is it? How independent can you be? How can you be that divorced to have it unemotionally and rationally? Very, very difficult right?”

“That doesn’t sound like a very responsible investment after you’ve seen Temasek already book a S$2 billion loss, an international agency downgrade it to junk, and SingTel having to throw another S$700 million in to try and keep it afloat. In that respect, do you think the Prime Minister might call the chairman of GIC and say ‘is this a very good investment to make’? Of course, as we know, he doesn’t have to pick up the phone. He doesn’t even have to walk around the house. All he has to do is look into the mirror – because he is also the chairman of the GIC.”

The government has said that there is no conflict of interest in the appointment of Singapore’s new Auditor-General, Goh Soon Poh, despite her being the wife of Senior Minister of State for Defence Heng Chee How.

Maj-Gen Chan Chun Sing, who is the Minister for Trade and Industry and the Minister-in-Charge of the Public Service, defended the appointment by saying that political office-holders are not involved in the audit process conducted by the Auditor-General’s Office.

The appointment, and explanation by Maj-Gen Chan, has been met with much skepticism from the public.

“So with all of these inter-family relationships across the government, the GIC, the stat boards and ministries, how can we not have a potential for conflict and not having true accountability? However hard they try, there’s got to be something somewhere. And yet there’s three and a half million Singaporeans – couldn’t we find people from other families who are just as qualified in those roles, to avoid that conflict of interest and avoid those potentials? It’s almost like the entire government will turn up at the same reunion dinner every new year.”