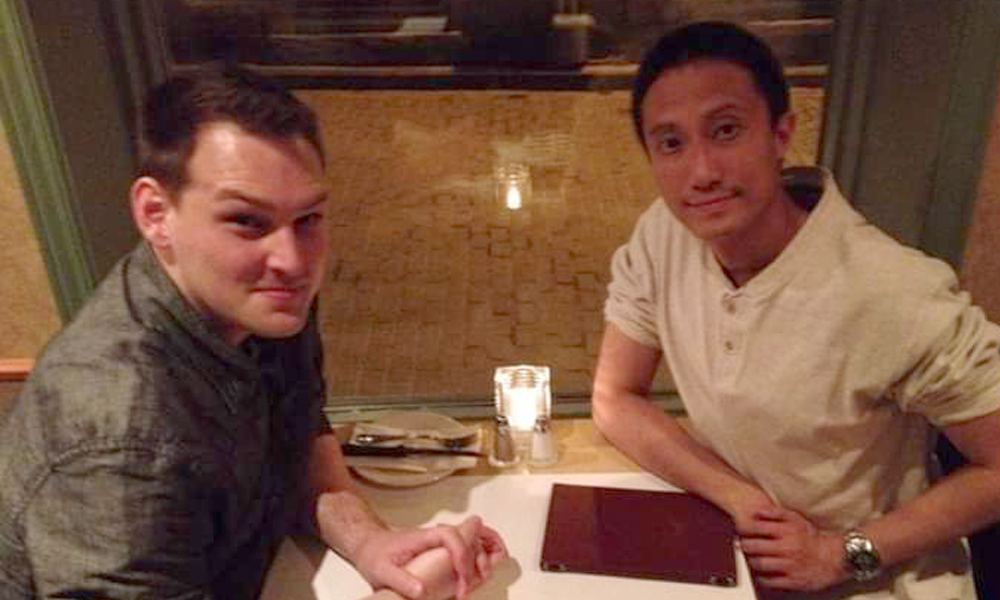 The man at the heart of the MOH HIV Data Breach scandal has posted his side of events online, following Health Minister Gan Kim Yong’s ministerial on the HIV registry data breach which saw data of 14,200 patients leaked.

US national Mikhy K Ferrera-Brochez has accused the Singapore government of making him a scapegoat for the data breach, hushing up the breach, using the law to silence him, and lying to the public by issuing false statements to the press.

Brochez first obtained the HIV registry, he said, after recovering 2 laptops that had been stolen out of his apartment by a Mr Levine, who he believed was having an affair with Ler Teck Siang – Brochez’s then-boyfriend and current husband.

He said that having noticed that some of his files were missing, he used a program from the internet to recover them, and that’s when the registry appeared.

Brochez said that he sought to alert health officials in Singapore to the data breach, but was ignored.

“Mr. “(Zachary) Levine had a sexual realtionship with my spouse (Ler Teck Siang) while living with his then boyfriend LW’s parents. Mr. Levine was unhappy with his living arrangements and the fact that his boyfriend wouldn’t come out of the closet to his parents. He attempted to talk Teck Siang into kicking me out so that he could move in with Teck Siang. Teck Siang broke off his relationship with Mr. Levine. When this happened Mr. Levine continued to harass us and even broke into our home on multiple occasions. Mr. Levine even stole Teck Siang’s work computer.

Mr. Levine made post on Facebook of the HIV registry in 2012. I screenshot-ted this and provided to to Dr. Jeffery Cutter at the Ministry of Health. Dr. Cutter and his staff chose cover this matter up. I elevated the matter to Dr. Amy Khor in October, 2013.”

“I sought help with multiple government agencies and I was repeatedly turned away or referred back to the Ministry of Health. Dr. Jeffery Cutter and Michael Ang the Deputy Director of Investigations repeatedly threatened me to gain my silence.”

Brochez accused the Health Ministry of lying that it was only made aware of the data leak in 2016.

“I provided evidence repeatedly in 2012 and 2013. I also provided to Dr. Amy Khor. I did attempt to pass evidence of the data leak to Lim Eng Peng and Wilfred Dennis who are managers at the Ministry of Health. They refused to look or take the proof. Mr. Dennis even went on to say that there was nothing wrong with that being made public and that it wasn’t against the law in Singapore. I am releasing some emails which I sent to various government agencies seeking help in 2016. If I am the one who stole and leaked this data then why was I seeking help with the data leak in 2016.”

Screenshots of emails which Brochez shared online show health officials among the list of persons whom he had alerted to the data breach.

He claimed that he made repeated attempts to alert MOH about the data breach, but was rebuffed:

“I did attempt to pass evidence of the data leak to Lim Eng Peng and Wilfred Dennis who are managers at the Ministry of Health. They refused to look or take the proof. Mr. Dennis even went on to say that there was nothing wrong with that being made public and that it wasn’t against the law in Singapore.” 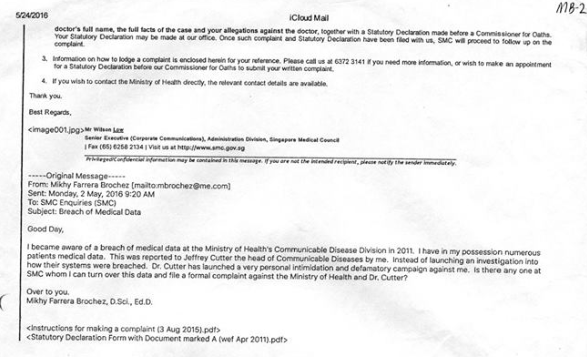 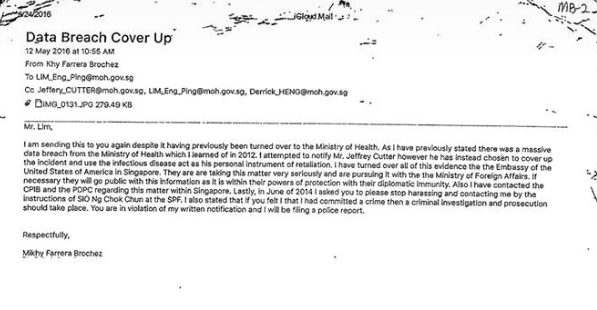 Brochez claims that following his revelation of the data breach, the Singapore government tried to silence him by raiding his home and seizing his computers, and imprisoning him for drug-related offences and falsifying his HIV-negative status to obtain employment in Singapore.

He claims that was not HIV-positive, and developed AIDS as a result of his jail stint.

In his latest online salvo, Brochez did not address the issues of why he lied about his credentials to gain employment in Singapore, the charges of providing fake blood samples to manpower authorities in Singapore, and  why he had emailed screenshots of the HIV registry to his mother, whom he claims he is “not close to”.

Now in the US, Brochez is facing charges for trespassing on his mother’s property.

Accounts from the Singapore Government and Other Accused Persons

Regarding the alleged laptop theft and data breach, Mr Levine said that he had never had an affair with Ler, and never broke into Brochez’s apartment. He said that he only learnt about the data breach from reading the news.

Health Minister Gan Kim Yong has said that Brochez informed MOH about the data breach in 2012, but was “evasive” and as such investigations could not make headway.

Gan said that Brochez served jail time in 2016 for drug-related offences and falsifying his HIV status on 2 occasions to gain employment and remain in Singapore.

He said that following Brochez’s deportment in May 2018, he leaked more data to even more persons – this time across several government authorities.

“In May 2018, after his deportation, Brochez sent a screenshot containing 31 records from the HIV Registry to several government authorities. All 31 records were not new. They were a subset of the 75 which Brochez had earlier revealed to authorities in 2016. MOH lodged another police report.”

The Health Ministry said that it made a police report about Brochez being in possession of those confidential patient records in 2016, and made another police report in Jan this year after being informed by the police that those records had been leaked online.