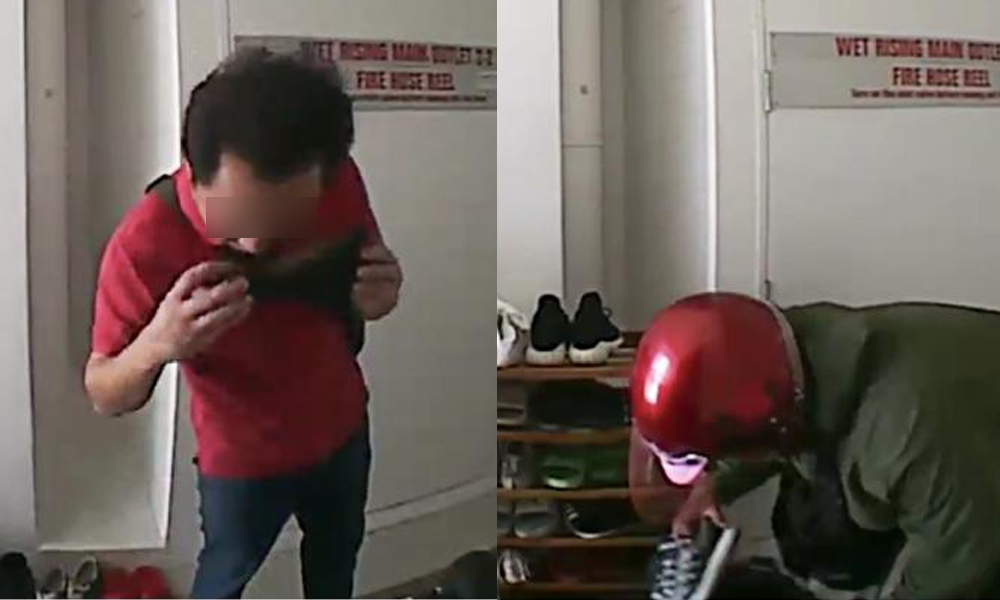 Lightning seldom strikes twice in the same location, but crime apparently does.

After noticing a man behaving strangely outside her HDB flat unit last year, Ms Cai decided to install a CCTV camera for her safety.

In the following months, that camera caught a pervert and shoe thief in action.

On 31 Oct 2019, a man who was wearing a red shirt was seen at 4.22pm picking up a platform shoe that was on the shoe rack outside Ms Cai’s unit.

CCTV footage showed the man lifting the shoe to his nose, taking a deep sniff off it, and looking very gratified.

The man then rummaged through Ms Cai’s shoe cabinet and picked out other pairs of shoes to sniff, and left the area after he had had his fill.

Ms Cai said that she didn’t lodge a police report then as none of her shoes had been stolen.

She disposed of the shoes that had been sniffed by the man.

Ms Cai received an alert on her handphone from the CCTV security system, and she saw that a man, this time wearing a red helmet, was up to no good.

The man took a pair of Adidas shoes that belonged to Ms Cai’s male friend, put the shoes in a backpack he was carrying, and hurriedly left.

Ms Cai and her friend gave chase but could not catch the shoe thief.

This time, she lodged a police report.

Ms Cai says she is worried for her safety and wants to warn Bukit Batok residents to be on their guard.