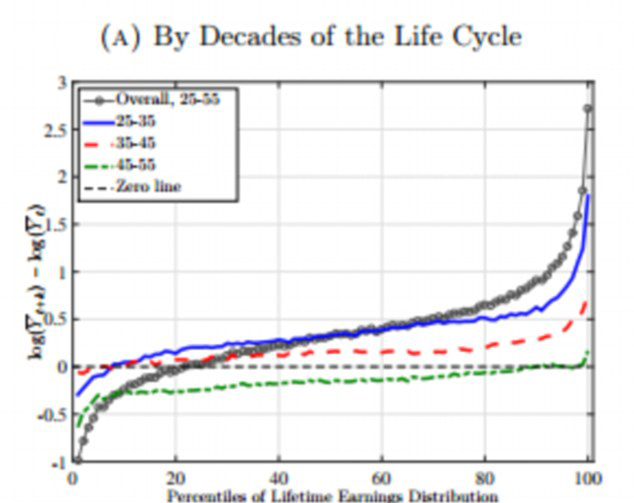 The amount a person earns during their first ten years in the work force has a significant influence on their earning potential over their entire lifetime, new research has found.

The Federal Reserve Bank of New York studied the period 1978 to 2010 and has concluded that a good start is vital to ensuring a better salary further down the line.

‘Across the board, the bulk of earnings growth happens during the first decade,’ states the paper written by economists Fatih Guvenen, Fatih Karahan, Serdar Ozkan and Jae Song.

The research isn’t good news for the millions of millennials who entered the workforce after the economic downturn of 2007 and who’s earning potential has got off to a slow start as a result.

From 2007 until the pace of hiring picked up last year, the jobless rates for millennials topped other age groups, even among those with freshly earned college and advanced degrees.

Many were forced to enter the workforce in lower-wage jobs and will have a hard time catching up later in their careers.

A steep learning curve early in ones career means that workers should be looking to increase their salary also, said Guvenen, an economics professor at the University of Minnesota.

‘At 25, I choose a job that allows me to learn valuable skills,’ Guvenen told the Washington Post.

Unfortunately for the average person earnings growth starts to stagnate after the first 10 years of work.

The researchers found that the average earnings growth for the 35-to-55 age group was zero, with only the wealthiest workers sustaining increases throughout their careers.

The Fed found that workers projected to earn the median lifetime amount would experience a 38 percent increase in their salary from age 25 to 55. 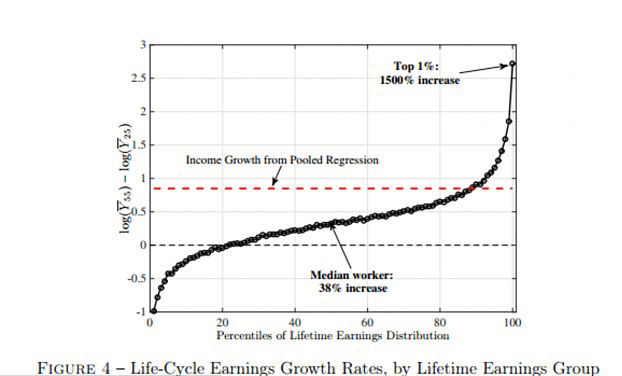 Workers in the 95th percentile can expect a 230 percent increase over the same period, while the top one per cent – typically doctors, lawyers and engineers – could see earnings grown by a whopping 1,500 percent.

At the other end of the scale is the bottom fifth of American earners, blue collar workers whose jobs are typically more physically demanding. They can expect to suffer an income decline from age 25 to 55.

‘Low-skilled jobs tend to use brawn, not brain,’ Guvenen said. ‘Brawn depreciates very quickly. Your back starts to hurt. You become less and less productive. You cannot work as much.’

This story was written by David McCormack.
Send us your stories at mail@redwiretimes.com