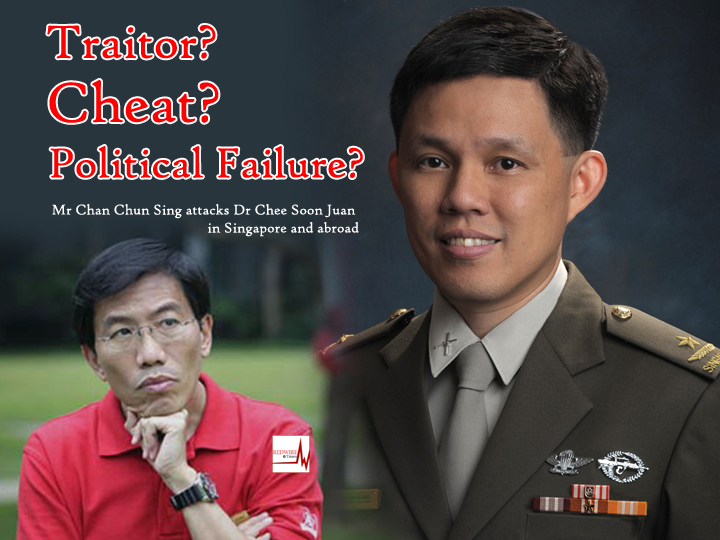 Minister for Social and Family Development Chan Chun Sing has written a scathing letter to the Huffington Post about Chee Soon Juan claiming that he was a nobody in Singapore politics.

Chan is offended that the Huffington post published two of Dr Chee’s letters which were critical of Singapore.

He tried to make the paper understand that it shouldn’t continue publishing Dr Chee’s letters.

In both letters, Chan labelled Dr Chee a failure, saying he hasn’t won any elections and kicked out the former leader of his party Mr Chiam See Tong.

To the Straits Times, Chan additionally rebutted Dr Chee’s article  where he commented that Singaporeans cannot live on S$1000 a month.

He insisted that Singaporeans who earn S$1000 a month can afford a flat and benefit from many aid schemes including getting subsidies on healthcare, transport, education and utilities.

Both letters are printed below in full.

Your website has given Dr Chee Soon Juan considerable but undeserved attention and space. You perhaps believe that he is a weighty political figure in Singapore. He is nothing of the kind.

Dr Chee has stood for elections thrice – and lost badly all three times, once receiving just 20 per cent of the vote.

The party he now leads, the Singapore Democratic Party, was once the leading opposition party in the country. But that was when it was led by Mr Chiam See Tong, a man everyone in Singapore, political friend and foe alike, regards as an honourable man.

Indeed, it was Mr Chiam who brought Dr Chee into the SDP in 1992. He mentored the younger man and promoted him. Dr Chee then proceeded to betray Mr Chiam, isolate him and force him out of the SDP, a party that he had founded in 1980 and had nurtured over 14 years. Since then the SDP hasn’t won a single seat in Parliament, though Mr Chiam himself went on to win elections repeatedly.

In 1993, Dr Chee was dismissed from the National University of Singapore for misappropriating research funds and for other serious misconduct, including surreptitiously recording conversations with university staff.

He has been sued for defamation not only by ruling party politicians, a fact that he likes to trumpet in the foreign media, but also by the doyen of the opposition in Singapore, Mr Chiam, a fact that he doesn’t mention because it is embarrassing.

And in 1996, Dr Chee and three of his associates were convicted of perjury by Parliament tor submitting false statements to a Special Parliamentary Committee. This is the equivalent of Congress convicting someone of perjury, a most serious offence.

It is because of these and other failings that Dr Chee is a political failure – not because he was persecuted, as he likes to pretend.  His party is now one of the weakest political parties in Singapore principally because voters do not regard its leader as an honourable man.

Dr Chee was disqualified from contesting the last two General Elections because he was declared a bankrupt in 2006 for failing to pay damages for libel to former Prime Ministers Lee Kuan Yew and Goh Chok Tong. He was discharged from bankruptcy in 2012 after the former Prime Ministers agreed to accept a reduced sum in damages. Since then Dr Chee has been campaigning to redeem himself in the public eye in preparation for the next General Election.

As he has done in the past, he has looked to the foreign media for redemption, chiefly because foreign journalists don’t know him as well as Singaporeans and he believes he can beguile them into believing he is the Aung San Suu Kyi of Singapore politics. Dr Chee, however, claims he is forced to publish in the foreign media because he has been silenced in the Singapore media.

But this is false. There are several socio-political websites in Singapore, some with as wide a reach among Singaporeans as the Huffington Post has among Americans. They have run several articles by Dr Chee. The local press also has carried several of Dr Chee’s letters.

Dr Chee’s problem is not that he has not been heard by Singaporeans. His problem is that they have.

Singaporean families earning $1,000 a month can indeed afford their own flats because of various housing grants. As a result, the lowest 20th percentile of households have an average net home equity of $200,000. That is an achievement no other nation in the world can boast of.

And that is not all. In recent years, we have enhanced our social safety nets. Lower-income households have benefited from, among other things, Workfare and various assistance schemes for medical, transport, utilities and education.

We will soon strengthen our social safety net further with the Silver Support Scheme to help Singaporeans with low Central Provident Fund balances.

Dr Chee claimed that he published in The Wall Street Journal (WSJ) because he could not publish his article in Singapore. But he has been published here before in both mainstream and online media.

The truth is, Dr Chee has always preferred to play to foreign galleries. For instance, when then Prime Minister Goh Chok Tong was conferred an honorary degree by Williams College in the United States,

Dr Chee turned up to protest and embarrass his own prime minister overseas.

He has continued to play to the foreign gallery in writing in its media.

For instance, when he writes in the right-leaning WSJ, he attacks our government-linked companies – never mind the many Singaporean jobs at stake if foreigners do not do business with our companies.

And when he writes in the left-leaning Huffington Post, he attacks the US-Singapore free trade agreement – never mind that this FTA allows our companies to compete in the US market and creates jobs for Singaporeans.

Dr Chee has always been ready to sacrifice Singaporeans and Singapore if he can win points overseas.

He is right now busy prettying himself in preparation for the next general election, trusting younger voters will not remember his past.

But older Singaporeans will remember that he was once dismissed from the National University of Singapore for misappropriating research funds and then staged a dramatic glucose-fortified “fast” in protest. They will also remember that he once heckled Mr Goh at a hawker centre.

Above all, they will remember that Dr Chee betrayed his own mentor, Mr Chiam See Tong. Mr Chiam had brought Dr Chee into the Singapore Democratic Party (SDP), but Dr Chee plotted against Mr Chiam and pushed him out of the party he had founded.

The SDP under Mr Chiam was Singapore’s strongest opposition party. The SDP under Dr Chee has become a shadow of its old self.

Singaporeans know who are honourable political leaders, like Mr Chiam, and who are not.