BOSS- Many of you may not know it. I was a super fan of the PAP Party, much more than IBs and Fabrications About The PAP.

When I was a little boy, my father always told me that PAP was the best and that we should fully support them. He often mentioned that PAP Spirit was the best in the political arena because it sought to care for its citizens and inculcate a collaborative nation building ideology. PAP people are also very capable and very humble towards the citizens.

“Son, beware of having too much Righteousness, for it is like a fire, which could make a person too reckless and get into trouble. It is easy to detect a high level of Righteousness, it is a burning sensation right at your chest. To counter Righteousness, you need to apply Manner. However, you should be more wary of Faith. Faith may look innocent and harmless, but it is so subtle that the person may not even realise that he is helping the devil commit crimes. In Chinese, we called it 助咒为孽. When a person had too much Faith, it would end up as Blind Faith. Detecting unusual level of Faith is not easy, generally when you do not understand why people would risk their lives, their time, and their money for a cause, you really need to stepback and think again. To counter Faith, you need to apply Wisdom, which in itself would be very low in the first place.“

After my father passed away, I always remembered his teachings and adhered to it closely because I am very certain that I can never be wrong by following the PAP Spirit.

Therefore, in all the elections, I had supported them fully and voted for the PAP Spirit. I can still remember during the LKY and GCT time, the PAP Spirit was super high! When I was at the voting booth, merely looking at the thunder logo would make my tears flow because I can deeply feel the PAP Spirit and the group of great PAP people behind that logo.

Voting for them was so easy, just by searching for the logo on the voting slip and making a mark beside it, as simple as that! Voting for them gave me a strong feeling that I am doing my part for the overall well-being of Singapore – the pride and satisfaction are indescribable.

The reason for this simplicity was because PAP had all the 3 Powers in great harmony. Do you know that there are also 3 Powers even for political party? In the case of political party, the 3 Powers are:
Heaven (天): PAP Spirit (精神)
Earth (地): PAP Thunder Logo (标志)
People (人): PAP People (人才)

When the 3 Powers are present at the same time and in harmony, great achievements can be made, which was why Singapore could have made such achievements and lasted for 50 years. Of course, not forgetting the People Power (人和) that was bestowed upon them, giving them absolute power in the parliament.

Today, trying to vote for PAP is not as easy as before because the 3 Powers had dispersed. The spirit is gone, they no longer care for the citizens, instead, they started a series of labellings, names-callings, including but not limited to: racists, bigots, xenophobes, poor upbringing, and stating that Singaporeans envied the rich. Worst, self-proclaiming themselves as elite where in fact they are far from being one.

As for the PAP people, they had either passed away or had retired. I personally missed Tan Cheng Bock and his capability and humbleness. The only thing that remain unchanged is the Thunder Logo. However, when I look at it today, the feeling is no longer the same because the spirit as well as the people are missing.

Of course, I am not the only one with this feeling. While surfing the web, I noticed that someone had attempted to add back the ‘people factor’ to the logo in an attempt to rekindle the missing ‘people factor’ back into the logo. I was with tears again when I saw the following, but it was for a very different reason. 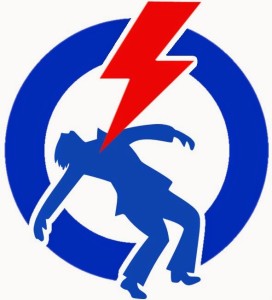 Out of the 3 Powers, the least important is the logo. If you ask me if I like the thunder logo, my answer would be that I prefer SlugTerra that my son drew, at least I feel happier looking at that.

I am very glad that my father had put so much emphasis on the spirit when praising PAP in the past, which is why I can easily see that the promise of “More Good Years” is derived from the spirit, not the logo.

Accordingly to law of science, spirit cannot be destroyed but move from one body to another. I will continue to hunt for the spirit no matter whether it is hiding in WP, NSP, SDP,  SFP, etc.

This article is courtesy of BOSS (also known as Basis of Singaporean Spirit). The original article can be found here.
(Ed- eh BOSS, cannot anyhow call yourself “BOSS” ok, later the real BOSS, LKY, not happy then you jialat)