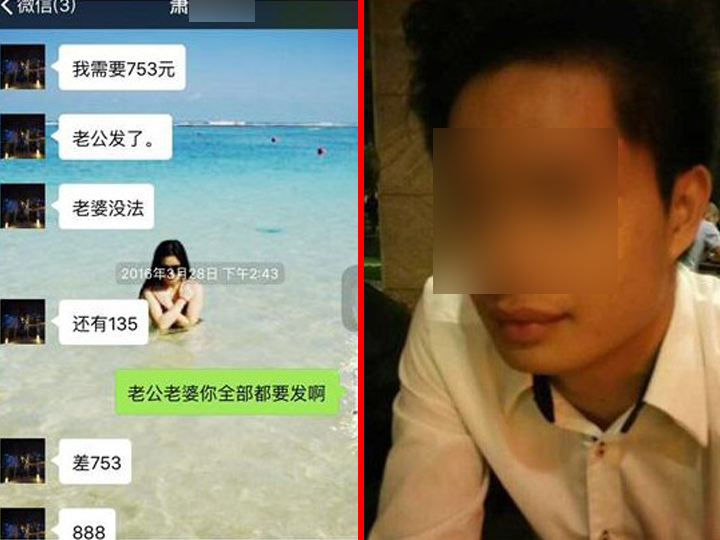 A chance meeting at a KTV bar in Singapore led to this China girl giving a one-night lover her body and subsequently, her money too.

23-year-old Qingdao native, Ms Feng, says that she came to Singapore in March last year and went with some friends to a KTV bar to have drinks and sing songs.

There, she met a man who called himself “Xiao”.

Xiao said he was a China native too, but had come to Singapore at a young age and had since changed his nationality to become a Singapore citizen.

Ms Feng said they fell in love and spent the night together.

After that encounter, Ms Feng returned to China and didn’t contact Xiao.

But 8 months later, he dropped her a text message on WeChat.

The two exchanged messages and rekindled the flame of love.

That’s when he started to request money.

At first, he said he needed to borrow about S$150 because a friend of his was getting married, so she transferred the money to him.

In April this year, Xiao told Ms Feng the passions of his love were too strong and he wanted to go to Qingdao to look for her.

A lovesick Ms Feng again lent him the money.

When it came to the day that he was supposed to arrive in Qingdao, Ms Feng says she received a WeChat message from someone claiming to be Xiao’s sister.

The person said that Xiao had a fever and was hospitalised, and therefore cannot meet her.

After that, Ms Feng says she never heard from Xiao again – her texts and calls to him went unanswered.

Ms Feng has warned ladies not to be scammed by the sweet-talking men like Xiao who harbor intentions of taking your money and hitting the road.

“He told me he couldn’t stop loving me, he wanted to meet my mother and even wanted to visit my hometown to pay his respects to my grandfather. I was so foolish to be duped by him.”