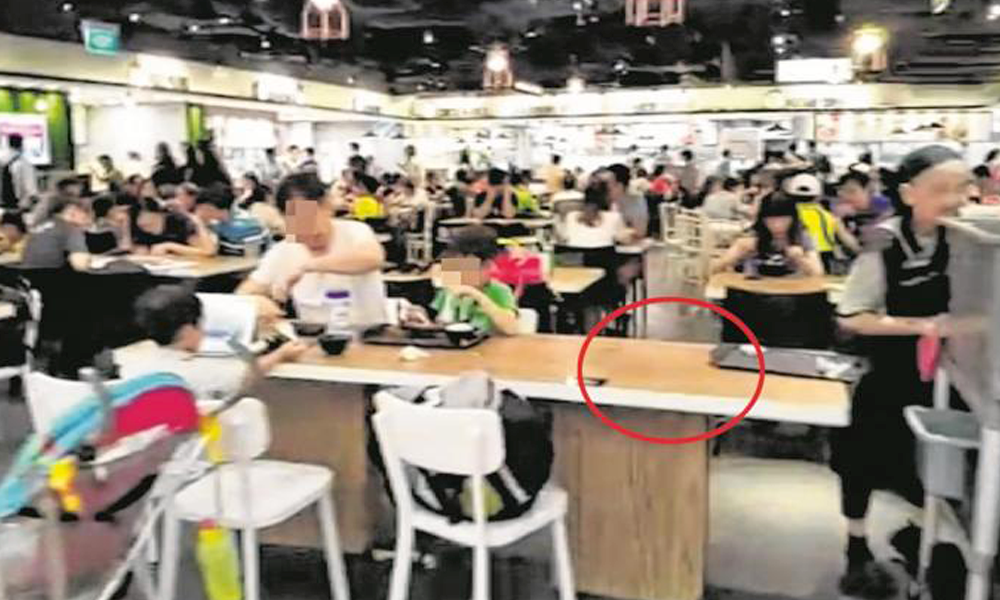 A scuffle broke out in the Clementi 4th floor food court on Friday (29 Jun) following a diner’s attempt to return her tray.

42-year-old housewife Mdm Lim said that she finished her meal at about 6.15pm and saw that the usual elderly cleaner aunty was working that day.

Mdm Lim then went up to the cleaning aunty and placed it on the table next to trolley.

“The frequent customers here know the cleaning aunty has difficulty moving around. We don’t want to make her job difficult so after eating we will put our trays on the table near to her trolley where she can reach them.”

At that moment, Mdm Lim said that angered a man (pictured) who was eating at the table with his wife and two children.

She said the man got up and yelled at her, “Don’t put your dirty tray next to my kids!”

Mdm Lim said that the table was big enough to sit 8 people, and she left the tray there to make life easier for the cleaning aunty.

She said that the man, seeing that she didn’t respond, took out his handphone and took a photo of her and said he would make her “famous” on the internet.

“I tried to explain but he wouldn’t listen, so I left with my friend and my son. As I was leaving, I thought I also better take a photo of the man, so I took out my handphone and snapped a photo of him from a distance. He saw me do that and rushed towards me, trying to grab my handphone. I was scared he would attack me so I called the police.”

Police officers subsequently arrived and cooled tensions between the two, but an indignant Mdm Lim said she intends to pursue the matter further.

“I went to the police station to make a police report that night. I’m also planning to lodge a Magistrate’s Complaint against that man.”