Yes, Channel NewsAsia (CNA) has got itself in the news for the wrong reasons again.

This, time, the news channel, which prides itself on balance and objectivity, has been accused of trying to “save face” for MP Josephine Teo, after her comments at a REACH forum drew much criticism from the public.

Why so much ado about a simple Jo Teo piece?

“Senior Minister of State for Finance and Transport Josephine Teo was also present. She addressed one participant’s suggestion that national servicemen should be paid more.

While she noted the importance of giving NSmen recognition, Mrs Teo said service for the country cannot be measured in dollars and cents.”

That statement angered many netizens, who countered that if that’s the case, why should PAP ministers’ contributions be measured by the money they earn.

The article was deleted on March 3, some 5 days after it was first published online.

You can read the full version of the story, which was cached on Google, right at the bottom.

But for now, why does CNA persist in shooting itself in the foot and taking the Singapore public head-on?

Is it because the channel thinks Singaporeans are too stupid to notice, or too bo chup to care?

Or is this really a clever ruse to draw more attention to the topic, knowing how neow Singaporeans can be that they’ll even dig up rat story after rat story – so long as its critical of a PAP figure?

Speaking of rat story, remember this? 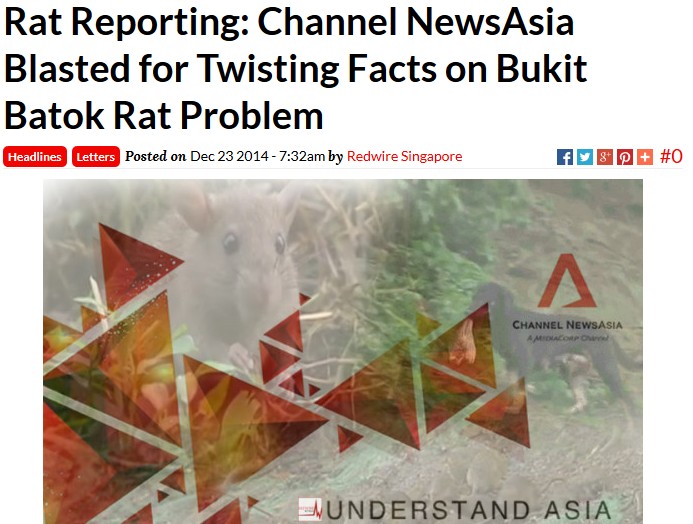 Again, CNA was blasted for allegedly twisting the words of a dog welfare association volunteer, to such that she appeared to be condemning stray dogs and the feeding of these dogs for the Bukit Batok rat problem.

Which got netizens rankled as well, gave rise to an even more heated discussion on the rat problem, and prolonged talk about the issue.

And since we’re on the topic of heated discussions… 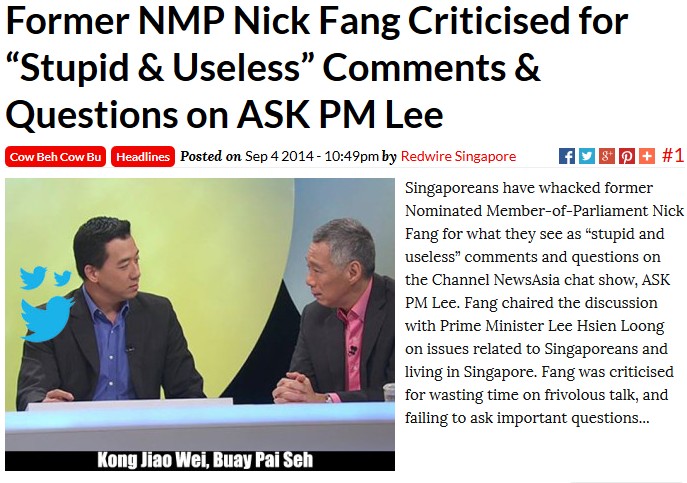 Oh boy were netizens jumping at CNA editor and former NMP Nicholas Fang’s “kelong” tactics, which they felt were an attempt to draw attention away from the hard questions thrown at Prime Minister Lee Hsien Loong. 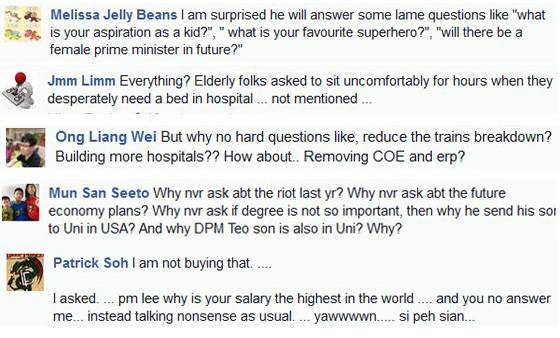 Which begs the question – what did netizens do next?

Yes, throw up even more difficult questions which probably made more white hair spring up on our poor PM’s and Little Nicky’s heads.

No one’s accusing state media entity, CNA, of being a subversive element with an anti-government agenda.

That would be pure rubbish (or too many Tigers after 10.30pm).

But the value in its indiscriminate deletions and little twists and turns is that it draws more attention to a topic, spurs people to re-visit the issue, and provoke discussion.

So yes, CNA is probably doing our nation a service – one which cannot be measured in dollars and cents.

SINGAPORE: More than 100 Singaporeans gave their feedback on Budget 2015 at a forum on Thursday (Feb 26), organised by feedback unit REACH.

One concern was whether lowering the foreign domestic worker concessionary levy could cause an influx of such workers.

Senior Minister of State for Health and REACH Chairman Amy Khor gave the assurance that there is a foreign worker dependency ratio in place to control the numbers. She added that the purpose of decreasing the levy is to help the many families with caregiver needs.

Senior Minister of State for Finance and Transport Josephine Teo was also present. She addressed one participant’s suggestion that national servicemen should be paid more.

While she noted the importance of giving NSmen recognition, Mrs Teo said service for the country cannot be measured in dollars and cents.

Ms Grace Morgan, a participant at the forum, praised the Budget announcements.

“My overall impression is that it is a very inclusive Budget because it has a lot of features for the lower-income as well as the middle-income group, and I think that it ticked a lot of boxes that people wanted to be ticked,” Ms Morgan told Channel NewsAsia before the event.”