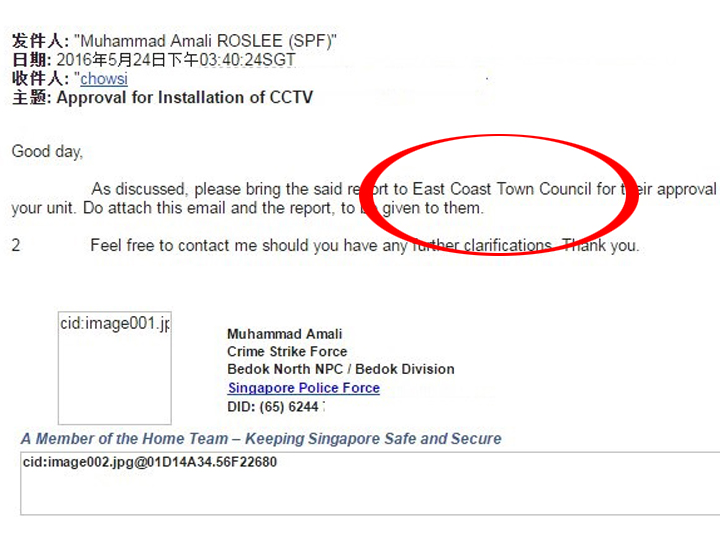 CHOW: I am a resident of Aljunied GRC and my daughter has previously feedback to MP Low Thia Khiang about the security situation and frequent delinquent loitering at our area which resulted in the Singapore Police Force installing a CCTV outside my home for about 3 months.

As there’s no improvement to the circumstances, I decided to pay for my own installation but was unfortunately this was met with a hostile response from my recent next door neighbour who complained to a nearby PAP town council. She took photos, pointed middle finger at my camera and kicked up a ruckus for unknown reasons.

The PAP town council probably directed Aljunied-Hougang Town Council to take action and a staff by the name of Ms Lok subsequently issued a warning service card to me. I then turned to police who advised me to seek permission from East Coast Town Council.

Now why as residents of Aljunied, do we have to go through PAP institutions like the People’s Association to obtain approval for almost anything that affects our life? Is it because of last year’s GE results that has emboldened the government to crack down on Opposition run towns and its constituents?

I actually do not care for who does what but hope for due processes of the law to be respected if we are a developed country, I also noticed that appeals and feedback rendered to the government by us often deliberately falls on deaf ears as my feedback to HDB regarding the welfare of a large dog cramped in a 3 room flat went unanswered.