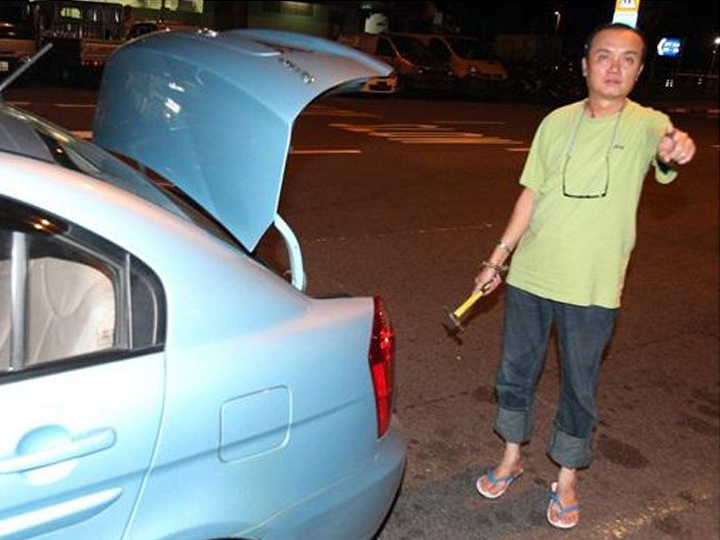 When ex-GrabCar driver Ah Teo picked up an Indian couple at Orchard Towers, he didn’t expect that that trip would be his last for the transport company.

The incident took place at about 7.15am on 28 April this year.

The 51-year-old ex-convict said that the couple smelt strongly of alcohol at the time.

The man asked to be dropped off at City Square Mall and after the he was to send the lady to Pasir Ris.

Ah Teo helped the man put his e-scooter in the boot of his car and started the journey.

When they reached City Square Mall, Ah Teo was about to turn into the car park when the man asked him to stop by the roadside.

Ah Teo says he refused because that was a corner and a blind spot, so he started to turn into the mall’s drop-off point instead.

That’s when the man got aggressive.

Ah Teo says the man continued to verbally abuse him even when he stopped the car.

“He was scolding me with vulgarities. I retrieved his e-scooter from the boot for him but he was getting more aggressive. I was afraid that he would use the e-scooter to hit me, so I took out my hammer from the boot too.”

That’s when the lady got out of the car and diffused the situation.

After the man left, Ah Teo says he carried on sending the lady to Pasir Ris.

But midway through the ride, she asked to get off and left without paying.

Not knowing what to do, he called Grabcar.

“That’s when I was told a customer had complained about me, saying I used a hammer to threaten them. The company said it would terminate my service.”

Ah Teo says he feels wronged because he wasn’t aggressive towards the couple.

After the incident, he went for two months without work.

Now, he does ad hoc handyman jobs and is driving for Uber.

Previously, Ah Teo was jailed for about 4 years for forging passports.

His wife divorced him and his children now live with her.

Ah Teo says he lodged a police report after the incident, and tried his best to keep calm despite the abuse he received.