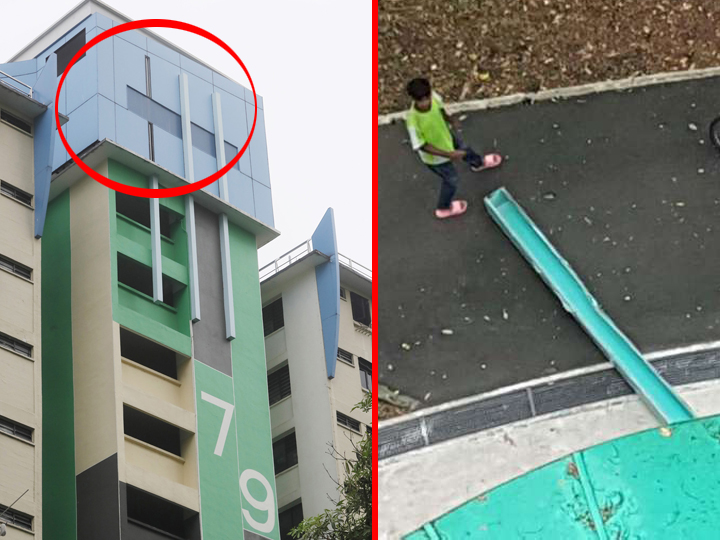 Two metal bars which were part of a decorative façade on the top floor of the Block 77 Indus Road HDB flat dislodged and dropped off on Saturday (1 April).

No joke lah, the incident took place at about 12.45pm and fortunately no one was injured by the falling 3-metre long metal beams.

One of the bars fell on a pavilion, while the other fell on the ground floor.

“It was found that two decorative aluminum panels on the facade of the block had fallen off. We had cordoned off the other blocks with similar decorative panels as a precautionary safety measure.”

Staff cordoned off Block 77, 78 and 79, and discovered that one of the bars on Block 79 was also missing.

The matter is being investigated.

MP for Jalan Besar GRC Lily Neo said that all metal bars will be removed if necessary to prevent such an incident from re-occurring.

This isn’t the first time that parts of the façade of older HDB flats have fallen off.

There were 3 of such incidences reported last year.

A sunshade in Tampines was partially dislodged in September, a piece of facade fell from a block in Circuit Road in October, and a slab of plaster fell from the top of an Hougang block in November.