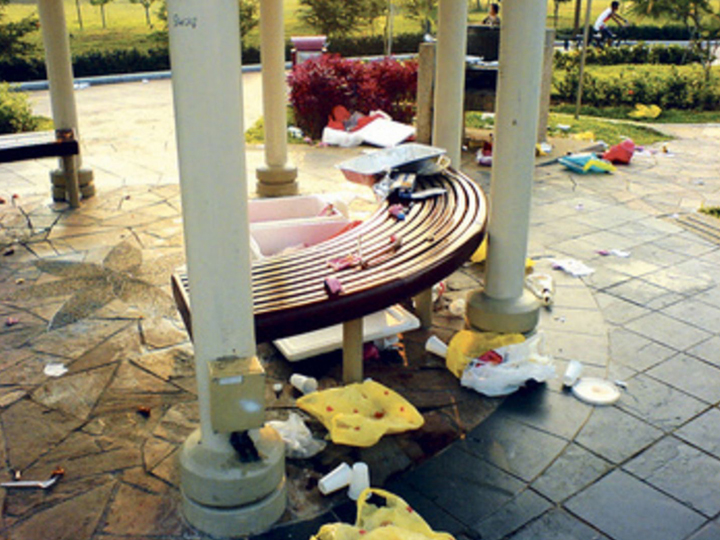 Parliamentarians from the Workers’ Party have opposed part of a Bill, which would allow for the state to appoint volunteers to police their neighbourhoods and fine litterbugs.

Such a law would give volunteers the power to conduct arrests, searches and seizure of items, when deemed fit by the NEA’s Chief Executive.

Nee Soon GRC MP Lee Bee Wah had mooted an idea like this some time back, in her “bao toh litterbugs” proposal.

(In fact, Lee Bee Wah also kind of predicted that it would become compulsory for school children to clean their classroom! She should really pursue a career in fortune-telling!)

We can only hope that Lee Bee Wah’s recent call to scrap the 3/4 tank rule for vehicles travelling to Malaysia is another prediction that might come true.

But back to the WP.

WP parliamentarians slammed the “bao toh and fine litterbugs” scheme as a menace to society.

Aljunied GRC MP Pritam Singh said it might push favourtism to the for and promote power play:

“With volunteers extended enforcement powers, neighbours can potentially sign up as innocuous and well-meaning volunteers, but who would then have to exercise their enforcement powers to summon some friends and neighbours in some cases while issuing a warning in other cases, and exercising compassion in yet another series of cases depending on each situation. This flexibility which enforcement officers are endowed with, has a real risk of inadvertedly promoting a toxic environment in our communities. It can be construed by non-volunteer neighbours as blatant favouritism or worse, as an attempt by some volunteers to create power or patronage network”

“Already, a couple of the leaders of the stakeholder NGOs have made public statements that suggest the new powers could be taken too far. One said that he was keen to see the powers extended to booking those who smoke in non-smoking areas and those who park illegally (3). Another said that he would like to see volunteers appointed as block ambassadors to police their own blocks of flats (4). Where and when would volunteer auxiliary officers stop their policing of the community? Today is littering in the neighbourhood, tomorrow is proper recycling in the blue bins downstairs, the day after tomorrow is kids playing ball in the void deck, and the next day what neighbours do in their corridors and even inside their home in name of dengue eradication? This looks like a slippery slope down the road to a police state where neighbours prey on each other and erode the mutual trust that we have painstakingly built up over the decades.”

And Hougang SMC MP Ah Huat (sometimes known by his full name, Png Eng Huat) called on the NEA not to be so giam (stingy) and pay people if they want to put them to work.

“The fundamental questions remain – is there a shortage of manpower at NEA to warrant such a move to arm volunteers with enforcement powers? Is NEA losing the battle with litterbugs and dengue? If it is about manpower, will the agency consider hiring retirees and part-timers on contract basis to assist?”