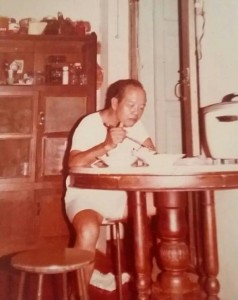 LAWRENCE CHONG: That is my father having a late lunch. He did the night shift and will finish his run at 4am. The marble top table is now at least 50 years old and is still in use. Once the legs broke and my dad being a good handyman, repaired it himself. I remember he even fashioned a letterbox out of a damaged toy piano.

That cabinet behind him is an indispensable “refrigerator” for any family back in the old day. Unfinished food are kept inside to he consumed at the next meal. Four little bowls filled with water and placed beneath each leg of the cupboard acted as moats to prevent ants from crawling up and into the cabinet. The rice cooker is a National. They were built to last back then. 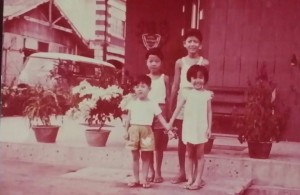 The Biltmore Hotel where Father based his taxi was a palace in the eyes of the shanty village’s resdients just a little further down the road. Biltmore was used as a temporary HQ for NOL after it went bust. The general manager was a kindly lady. The village kids used to open doors for the hotel guests and were rewarded with 5 cents for our efforts. We used to peek into the hotel with wonderment whenever we have the chance. Caucasian ladies sunbathing in bikinis on the balconies used to draw the men of the village out to stare.

Taxi driving was a sought-after job back then. Diesel was 30 cents a gallon and the relief driver pays $8 a day for his slot. The road tax was a princely $600 a year. I remember father drove a Morris Oxford number plate SH4724. US GIs on furlough from the war in Vietnam were a common sight, young men most of them. They used to book Father’s taxi for the duration of their R & R in Singapore. He would bring them sightseeing and showed them the nightlife. Commissions were earned from the shop that he brought them to. After their short stay they will go back to the war in Vietnam. Father used to receive the occasional letters from these young soldiers. Over times the letters will stop coming and when I asked why, Father told me the soldier had been killed in battle.

Father was a kind and humble man who took care of the family. He had a checkered youth but he put it all behind him after he got married. He was the son that my maternal grandmother never had. It has been 25 years since he passed on but he is forever someone I am proud of to call Father. 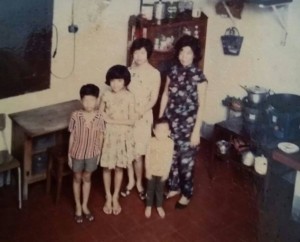 This heartwarming story was written by Lawrence Chong.