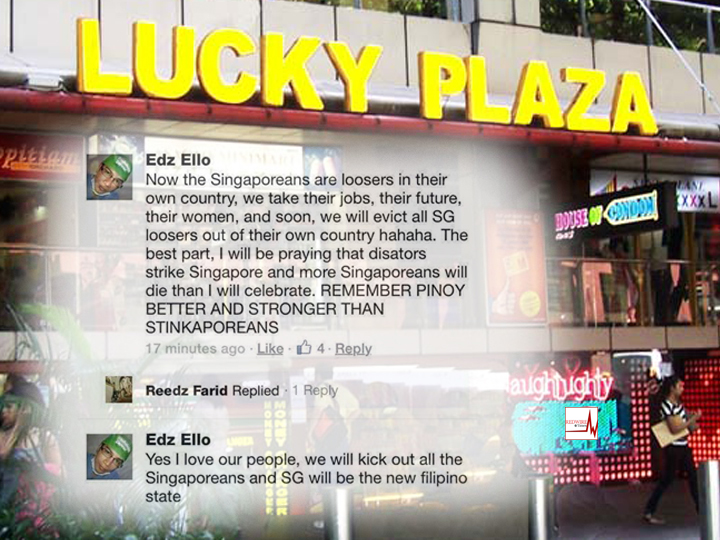 Edz Ello, or Ed Munsel Bello Ello has been charged: 2 counts of publishing seditious material, and 3 counts of making a false police report.

Now if you remember Edz, he’s the Filipino nurse from Tan Tock Seng Hospital who made hateful comments against Singaporeans and the Islamic religion.

The 28-year-old did that in January.

He said in another post that he would “kick out all Singaporeans and SG will be the new filipino state”.

The charges, under the Sedition Act, say the publications have the tendency to promote feelings of ill-will and hostility between Singaporeans and Filipinos in Singapore.

Edz is accused of lying to the police at Chong Pang Neighbourhood Police Post, saying he didn’t make those comments on Facebook.

He also lied to a senior officer at Ang Mo Kio police division, saying that his Facebook account was hacked.

Edz can be fined up to S$5,000 and/or jailed for up to three years on each charge of sedition if convicted.

For lying to the police, he can be jailed for up to one year and/or fined up to S$5,000 on each charge.

When the news first broke over Edz’s comments, there was worry that this nurse might be of unstable mind, and attack local patients at TTSH given his disdain for Singaporeans.

Police were also under pressure to pursue the case against Edz at that time due to the potentially seditious nature of his comments, and the history of Singaporeans being jailed for sedition.