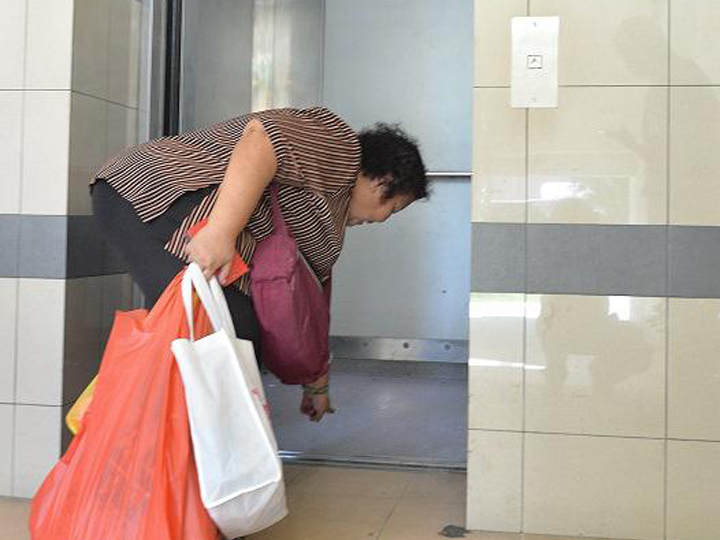 You gotta give this garang Ah Ma, Mdm Tan, points for bravery lah.

How many people will put their lives on the line and purposely go and test malfunctioning lifts by riding in them personally?

But the 65-year-old did just that over 3 days to make sure the lift was safe for her grandsons to use.

And she got a rude shock every one of those days.

Mdm Tan says that she has lived at Block 9 Eunos Crescent for the past 10 years and one of the lifts at her block as started giving problems since upgrading work started recently.

On 6 Jan, she took the lift with her grandsons from the ground floor to go to her home on the 5th floor.

Altogether, there were 7 people in the lift at the time.

Suddenly, at the 3rd floor, the lift jolted sharply and “dropped” to the 2nd floor before moving as normal.

That scared the hell out of everyone in the lift, said Mdm Tan.

“This happened at around 9pm. My youngest grandson who is only 2 years old was so scared he started crying. I was also very frightened.”

To make sure the lift was safe, she tested it again the next day (7 Jan).

And she got even more stunned.

“I took the lift at 3pm and 5pm. The lift reached my floor without any jolt, but when the doors opened, there was a gap of 4 to 5 inches between the lift floor and the floor.

“At night 10pm, I took the lift again, and the same jolting happened again like on 6 Jan, when the lift shook and dropped by one floor.”

Mdm Tan says the same “jolt and drop” also happened when she took the lift on 8 Jan.

Since then, she has refrained from using the lift and made a complaint to the town council.

It says it sends technicians to check the lift whenever there’s a complaint, and it will continue to monitor the situation.