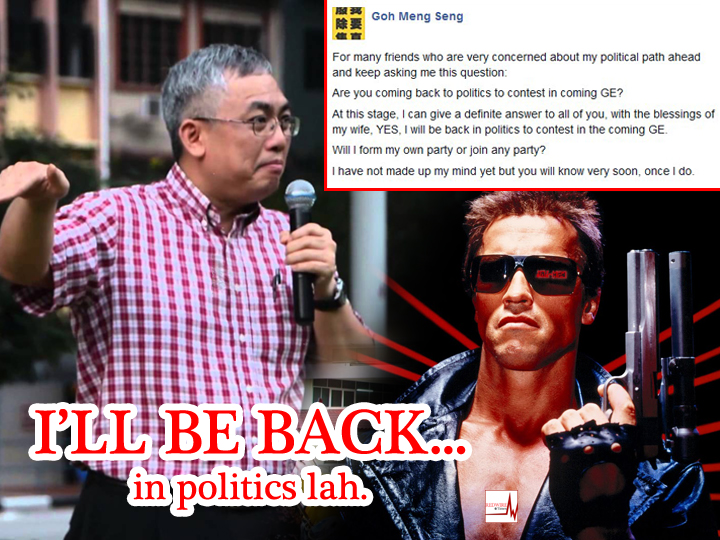 I refer to your stories on Goh Meng Seng’s impending return to politics, and his vision as Singapore’s PM.

Former NSP Secretary-general Goh Meng Seng has finally mustered enough courage to emulate M Ravi and throw in his lot in declaring that he intends to contest in the coming General Elections.

But the difference between him and Ravi is that the latter is transparent and bold enough to state unequivocally that he intends to form an independent team to contest against the PM in Ang Mo Kio GRC.

Brash he may be but I appreciate his brashness and candidness, and wish him all the very best in his endeavour.

As for this squirrel of a man Goh Meng Seng who has been in and out of the political scene at his own convenience, he has nothing concrete yet to announce save for his intention to contest.

Big deal to him but I for one would want to know who he is joining and where he is heading to. Is he going to keep this a secret until nearing the election?

What has he to fear?

Why make an announcement and leave unanswered questions? If he wants transparency from the PAP, then he should set the standard and not beat around the bush.

My guess is Goh cannot return to the WP. LTK and Sylvia will never take him back – not because he has an overly inflated ego and refuses to toe the party line, but simply because they have much better candidates than him.

For a person who is still harping that he was the former SG of NSP, my calculated guess is that he will try to engineer a return to the party. I mean where else can he go?

He needs a platform to contest and volunteers to help him campaign. What’s better than to have a party with all the resources?

If this is the case, then there is no mistake in me labelling Goh a self-indulgent and narcissistic man, someone who cares only for his own interest. He left the NSP shortly after the 2011 GE because he felt that he was too big for the party.

He thought that without his leadership, the party would plunge into the abyss. Well, he was proven wrong. The party flag is still unfurled no thanks to him. In fact, they will emerge stronger after their recent OPC where they were rid of problematic people and dead wood.

Witnessing the change of event, he is eyeing a return to the party which he had so unceremoniously abandoned just to suit his needs. To the new NSP CEC, my advice is not to touch him even with a 10 foot long barge pole or you will live to regret it.

To Goh meng Seng, I present him with this old Chinese saying;` A good horse will not return to eat at the old pasture’.

If you think you are worth your weight in gold, be bold enough to go independent and not take the easy way out. Let this be a test of your mettle.

Only then will you gain my respect and those who had rooted for you at the last election.

Can he do it fairly and squarely?

Only time will tell.

This letter was written by Tan Ah Lee.
Send us your letters at mail@redwiretimes.com