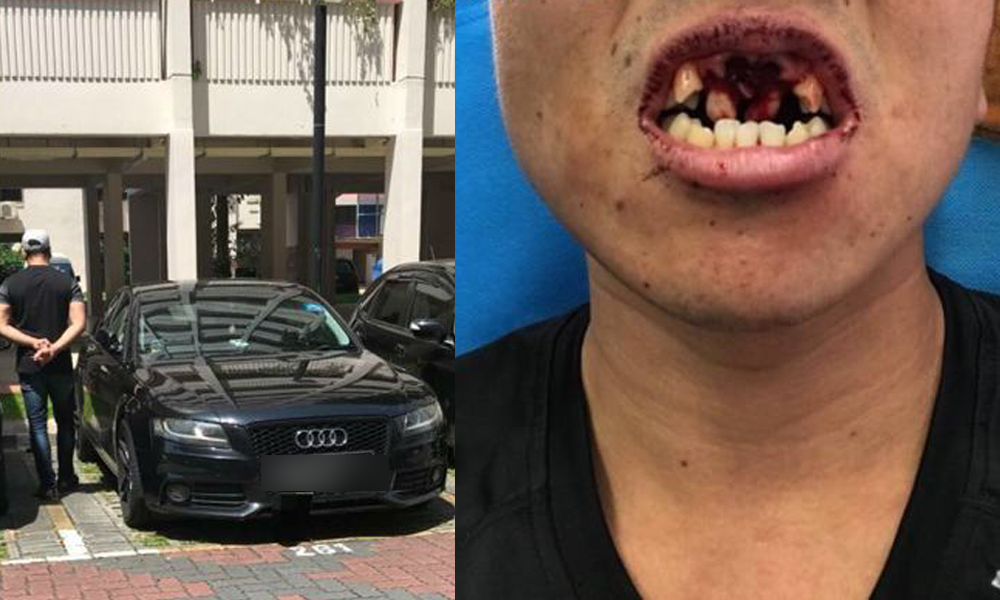 A Grab driver has been accused of punching a passenger , resulting in him breaking 4 of his teeth.

The passenger, Henry, was heading to Choa Chu Kang together with his wife and 2 children.

The Grab driver, who arrived in a black Audi, refused to ferry Henry and his family because one of Henry’s children was a 5-year-old.

The Grab driver then told Henry that he should have indicated during his booking that he had a young child with him.

Henry said the driver told him to book another ride and drove off, but returned about 5 minutes later.

By then, Henry had already booked another ride with a Ryde driver.

The Grab driver then allegedly questioned Henry as to why he hadn’t cancelled his earlier booking.

Henry told the driver he that he should be the one to cancel the booking as he had refused the pick-up.

Henry said that when the Ryde driver arrived, the Grab driver started verbally abusing him and prevented him entering the Ryde car, and kept telling him to cancel his Grab booking first.

Henry agreed and his family then entered the Ryde car.

But, the Grab driver was still allegedly fuming, and opened the door of the Ryde car and punched Henry in the face.

Henry then got out of the Ryde car, called the police, and sprawled on the Grab driver’s black Audi to prevent him from leaving the scene.

He was later sent to Khoo Teck Phuat hospital by paramedics, while police officers questioned the Grab driver.

“I was attacked without any provocation, and it was carried out in front of my wife and two young children. The assault has caused serious mental trauma to me and my family. I feel a sense of helplessness for letting my children witness their father being attacked by a stranger.  Not to mention the effect this incident has on my children.  What if they learn from to solve their problems through violent means?”

Police have classified the incident as a case of voluntarily causing hurt, and investigations are ongoing.