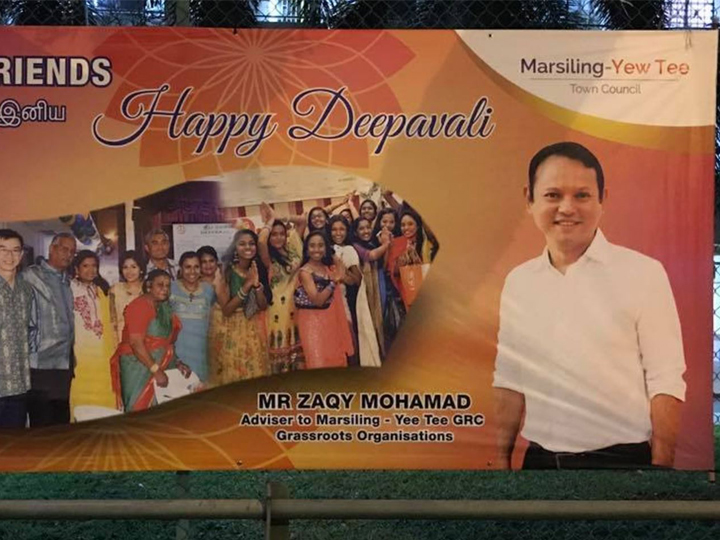 He’s not an MP for Marsiling-Yew Tee GRC – he’s a grassroots adviser.

Zaqy Mohamad was put flown in by the PAP as a stop-gap measure to replace President Halimah Yacob who resigned from her MP position to run for president.

Still, he is not possibly the first grassroots advisor in recent times to get his own giant banner in Marsiling-Yew Tee.

And, he’s also listed on the Marsiling-Yew Tee town council website under the “Our MPs” section, albeit being labelled as a “grassroots adviser” to the constituency.

He’s currently MP for Choa Chu Kang GRC and works as a business director for auditing firm Ernst and Young, in addition to his appointment as “grassroots adviser” to Marsiling-Yew Tee GRC.

The Singapore Democratic Party has said in a statement that is has initiated action in court to determine that a by-election must be called in the Marsiling-Yew Tee GRC to replace the seat vacated by President Halimah.

It condemned the PAP’s arbitrary appointment of Mr Zaqy in her place.

“The party is showing utter contempt to Singaporeans first by tailoring the Elected Presidency to favour its chosen candidate, then taking her out from her constituency and then refusing to call for a by-election to replace her.

To add insult, the PAP now announces that Mr Zaqy will replace Ms Halimah when he has absolutely no reason to be there. This is an abuse of power and a contravention of the democratic process.”