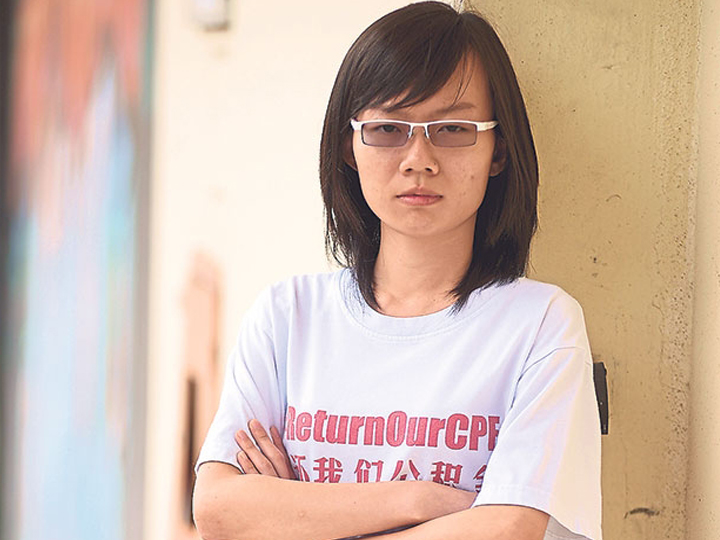 Social activist and GE2015 independent candidate Han Hui Hui has accused officers from the Singapore Police Force of “torturing” her during an interrogation session regarding the Hecklegate incident at Hong Lim Park.

She says that she lost weight as a result of the interrogation.

Ms Han also slammed the opposition bloc for refusing to stick up for her while riding on the publicity she generated.

Ms Han and fellow social activist Roy Ngerng, who had staged a Return Our CPF protest, were accused of heckling mentally-handicapped children at a carnival held by the YMCA at Hong Lim Park on the same day.

Mr Ngerng, who ran for office under the Reform Party banner in GE2015, has been fined S$1900 for public nuisance and organising a demonstration without approval, after pleading guilty to the charges.

This is Ms Han’s account of her interrogation over the weekend:

“On 9 Oct, two plain clothes police came to my home at around 11pm. At around 11:10pm, I called to postpone the appointment time from 11am to 8pm. The reason I gave was I have to work till 6pm and would need an hour for dinner as well as another hour for travelling. I’m not jobless as how the PAP IBs always lied about but I’m not sure if I’m gonna lose my job soon after today.

I consulted my lawyer with regards to the letter and was advised to have the appointment in the afternoon. On 10 Oct, I reached the police station at 2pm but waited till 2:30pm for the interrogation to start till around 10pm. No dinner was being served during the 8 hours interrogation from 2pm to 10pm.

I went for three toilet breaks at 4:20pm, 5:40pm and 7:00pm. It was very cold in there and my bladder was shrinking, go stand outside the police station and look at the layers of clothes they are wearing. It’s a waste of taxpayers’ money and they are not saving power, energy or being environmental friendly at all. Do blasting air-con and making people plead guilty bring justice? No, you’re just torturing people in order to get the answer you want so as to submit to your “boss” to fulfil your KPI.

At 7pm, the police asked me to go for dinner. I asked how long more it will take, she said in half an hour’s time again. At 8pm, I asked when the interrogation will end and the police said she wants to have dinner. She printed out the statements and told me to sign.

After signing at around 9pm, she took them away together with my notebook. It’s a paper notebook, not a computer notebook.
I called my lawyer the moment she seized my book but she said I’m not allowed access to legal counsel. I was not being detained and the notebook contains information that I will be giving to my lawyer for my legal defence.

There were like 300 questions on papers that I’ve gotta sign, just imagine all the other questions that were being asked, it’s insane. Now I understand why there are so many people mad with the use of disgusting political tools. Did you join the police force to bring justice or to be a puppet? Are you bringing shame to your uniform or do you feel proud of what you’ve done? I was 33kg when I went in and now I’m 32.5kg ‪

Back to the interrogation, first with filling of particulars then to give a background of what happened, it’s like you’ve got the ISD and all the videos so what else do you want? You want me to lose 500g then hopefully starve and make me faint in there? Seriously, you gotta #ReturnMyNotebook the notebook contains personal record that was prepared so that I would have accurate details of the matters in question for my lawyer. Unreasonably, the notebook that was seized by Inspector Wong Yu Wei since 10 Oct 9pm has yet to be returned, this deprives me of privileged legal communication with my lawyer.

Q) Did you plan to march?
A) We didn’t know to march in line or circles.

Q) When did you announce you wanted to march?
A) A map to march in circles was released on 15 Sep.

Q) Why did you march in circles instead of in a line?
A) To follow what AWARE did.

Q) Did people listen to you?
A) People said it’s retarded to march in circles.

Q) Why was there a parliament banner?
A) People on facebook suggested to print the parliament and march to it.

Q) Why did you march?
A) I did not want to march after the confrontation but the YMCA people pushed my participants and they marched so I went along.

Q) Do you know who your event participants are?
A) I only know the speakers.

Q) How well do you know them?
A) Leong will too ill to speak. Roy is being sued by PM and Janet wants to support so I let her speak.

Q) Were there others who spoke?
A) I think so but I don’t know them.

Q) Do you know your participants?
A) No.

Q) Is your event open to public?
A) Yes.

Q) When did you find out Teo Ser Luck will be at Hong Lim Park?
A) I found out on 26 Sep when I went to set up as usual.

Q) Did the authority stop you on 27 Sep?
A) I was approached by a person who claim to be the authority but I think he is a mad supporter of the PAP as this happened during previous events as well.

Q) Why is he a mad person?
A) He didn’t dressed like an officer and didn’t have any document to show.

Q) What did he say?
A) He said he was going to ask the police officers to arrest me for protesting.

Q) What happened after that?
A) A group of gangsters came and they looked like they were going to beat me up.

Q) Did they identify themselves?
A) Got one tried to lie he is a police.

Q) How did he lie?
A) By lying that he is yet refuse to hand me his pass as how the police procedures should have been as seen on TV.

Q) How about the rest?
A) Some wore shade, some seems to be hiding things behind them, not sure if were weapons that they want to use to assault me.

Q) What else were they doing?
A) One of them was holding the camera but his hands were shaking and so his friend helped him.

Q) Why do you think they videoed you?
A) For self-consumption and I think he is on drug hence the vigorous shaking.

Q) Were you told to go to the other lawn?
A) I do not know there was another lawn.

Q) Were you told to go to the smaller piece of land?
A) I remained at the place that we always were, we were told not to crowd around the toilet previously.

Q) What is the dress code for your event?
A) No dress code. I’m not communist and I fight because of democracy.

Q) How many people took part in the march?
A) I think it was 20 people but some people said only ghosts.

Q) Why did you insist to march?
A) Because of two Facebook pages “Fabrications About The PAP” and “Fabrications Led by Opposition Parties (FLOP)”.

Q) Did you use any equipment during the march?
A) The mic was spoilt by YMCA volunteers and the loudhailer has no battery.

Q) Did you step on the concrete pavement?
A) When the YMCA volunteers pushed me.

Q) How close were you with the YMCA volunteers?
A) They pushed me, it’s physical contact, there’s CCTV in Hong Lim Park.

Q) Do you know you passed by the minister?
A) I saw it from the video but not real life as he was surrounded by many tall people.

Q) How did the first march started?
A) When the YMCA volunteers pushed my participants from the grass to the pavement.

Q) What happened after that?
A) YMCA volunteers wanted to fight so I walked down the hill and told them to walk away.

Q) Who were the people holding the flag?
A) I don’t know them.

Q) Did they swing and wave the flag?
A) I was walking in front and didn’t look back.

Q) How do you publicise your event?
A) By telling people one month earlier.

Q) Did you post on your Facebook?
A) Yes, I will publicise the event almost every day.

Q) Are you the one who did those postings?
A) Yes.

Q) Who else have your password?
A) No one.

Q) Are you sure no one else have your password?
A) ISD do have my password and they probably heck to read every day and moment.

Q) Why did you not listen to the Nparks officer?
A) He did not show me any pass or document and there is no evidence to revoke my permit till now.

Q) Why did you started your event earlier?
A) It was spontaneous, I grab the mic as they wanted to arrest me.

Q) Why did you protest?
A) I want transparency and accountability towards CPF money.

Q) What did you register?
A) I registered for a speech.

Q) Why did you register for a speech?
A) I want to talk about CPF.

Q) What was your speech about?
A) About CPF.

Q) Why did you protest about CPF?
A) I want transparency and accountability.

Q) Did you went to the stage area?
A) I was at the mound hill.

Q) Did you went to the seating area of YMCA?
A) YMCA volunteers refused to let us U-turn and walk back so we walked the other way round.

Q) Why did you not listen to the police officers?
A) They claimed they are but they did not turn and show me their pass, they may be another Yang Yin.

Q) What did you registered for?
A) Speech.

Q) What about demonstration?
A) I did not burn effigies.

Q) How about performance?
A) I have no plan of dancing on 27 Sep.

Q) What was your intention?
A) To give a speech.

Q) Do you understand the T&amp;Cs?
A) To my understanding.

Q) Why did you shout “Return Our CPF”?
A) Because YMCA’s emcee shouted “We love our CPF”.

Q) Why did your participants scold the PAP?
A) Because their CPF money is being locked up by the PAP.

Q) Did you approach the YMCA organisers to talk peacefully?
A) They denied speaking to me.

In the end, she lost her cool when she wanted to go for dinner and told me to come another day but I said I want to finish the interrogation.
So she snatched and seized my notebook.

The police didn’t tell me what they were investigating and those people in parliament have so much to say about it. As for the opposition who spoke up against us, it’s bad enough that you are not doing anything to help younger generation like us and you’re here to criticise?

When things were successful and going well, no credit was given to me. Fine, go ahead and take them. Now that things are bad, I get all the blames. No worry, I am responsible and I won’t behave as cowards like you do.

Just because you can’t sue me for defamation over the words I say so you’re gonna use other method of political persecution? You expect me to respect you?

Threatening me, suing me and whatever you do to me will not change the fact that you’re bad. It only proves for fact you’re bad.”