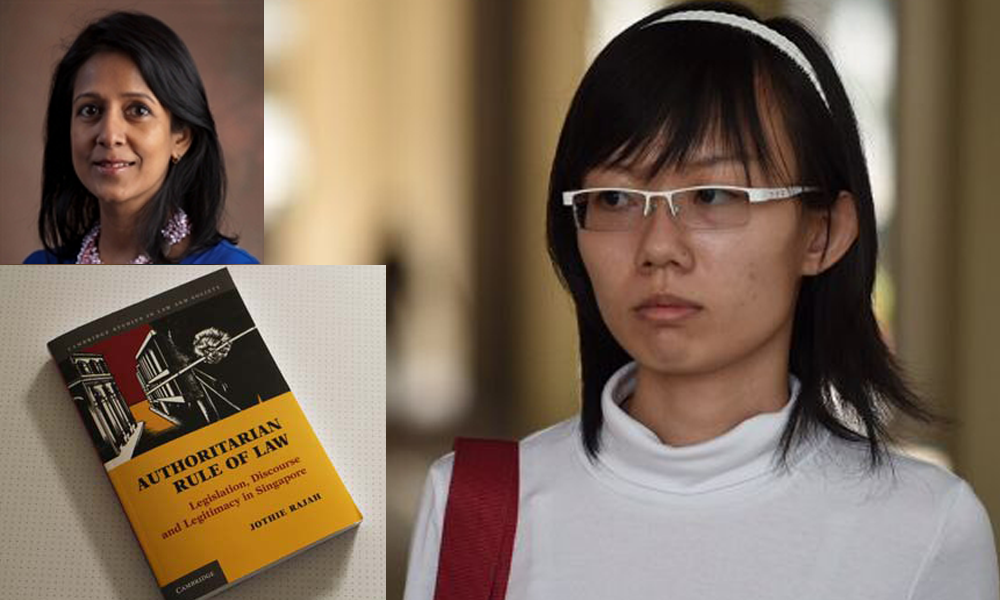 Political activist and one-time General Election candidate Han Hui Hui was dragged out a hearing on fake news chaired by a government Select Committee this afternoon.

This, after she was seen holding up what appeared to be a poster of a cover of a book – “Authoritarian Rule of Law – Legislation, Discourse and Legitimacy in Singapore”.

The book is written by Jothie Rajah, the ex-wife of Law and Home Affairs Minister K Shanmugam, who is part of the Select Committee and was in chambers at the time.

Han was not due to speak at the hearing.

In a statement, the Parliament spokesman said:

“Ms Han Hui Hui was brought out of the public hearing of the Select Committee on Deliberate Online Falsehoods by Parliament staff this afternoon, for creating a disturbance in Parliament while the Committee was hearing evidence. This was after she was requested to leave, but refused to do so.”

Han had reportedly been approached by parliament staff about a stack of papers which she had on hand, which she claimed were blank paper used for taking notes during the hearing.

She sat for a few minutes before she started to hold up the poster, then put it down and held it up again and this went on for several times.

Parliament staff along with police officers then approached Han and asked her to leave.

But Han was heard replying:

“I want to sit here because I want to follow the hearing… What else you want from me? I already give you my papers… What did I do wrong? Can you give me an official paper to say I cannot stay?”

One female member of staff was heard saying, “Either you walk out on your own or I bring you out.”

Han replied, “I’m not going,” and thereafter was dragged out of the chamber by 3 female staff.

She was then kept in a holding room for more than an hour before being escorted out by half a dozen officials into another room.