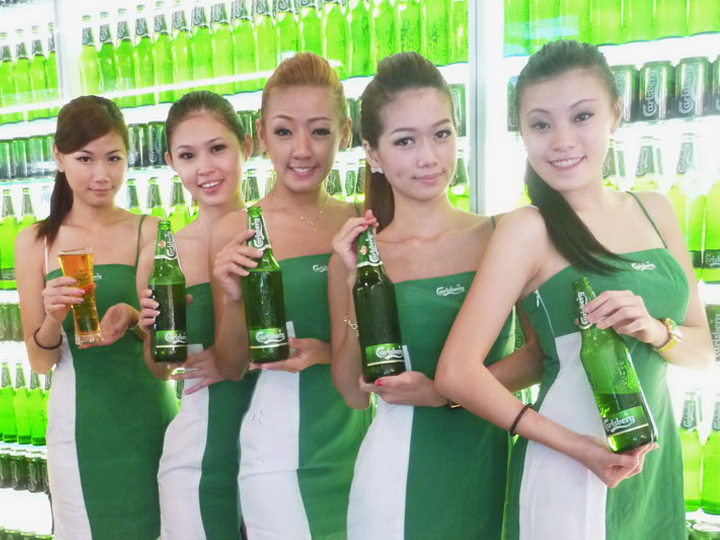 “Hara kiri! How can the gahmen take away our precious pi jiu meis (beer girls)?”

That’s the reaction of one Uncle Redwire spoke to, upon hearing of the beer girl ban.

He was wondering why there were no more beer girls at People’s Park Complex.

Uncle’s beloved beer girls have been banned from promoting beer at 107 markets and hawker centres managed by the National Environment Agency.

Another tipsy uncle said in Hokkien:

One even pined to us about his “Ah Hua”:

“At night I feel bored, I come to kopitiam and sit down, drink beer chit chat with Ah Hua. She pour me beer, talk for awhile, then happy already go home. Now how?  Talk to the Ah Neow (cat) ah?”

The NEA explained that “such activities may give rise to disamenities, such as touting and possible harassment of patrons when promoters compete for business.”

Coffeeshop owners we spoke to say such incidents have never occurred, and they are hard-pressed to figure out why NEA has banned the beer girls at this point of time, since they’ve been around for “donkey years” already.

They say beer sales have dipped by about 25 to 30 percent since the move by NEA.

Beer wholesalers too says the move has led to a drop of about 25 percent in sales.

Of the people Redwire spoke to, none were supportive of the ban, whether young or old.

“They’re pretty harmless. I’ve never seen any fights break out because of the promoters. Sometimes things get rowdy and people make noise and laugh loudly, but there’s no violence or anything.”

Beer girls are only banned at NEA-managed hawker centres and markets.

There’s always the coffeeshop around the corner.

Then again, beer promotion has not been allowed here since 1995, so if tighter measures are enforced…