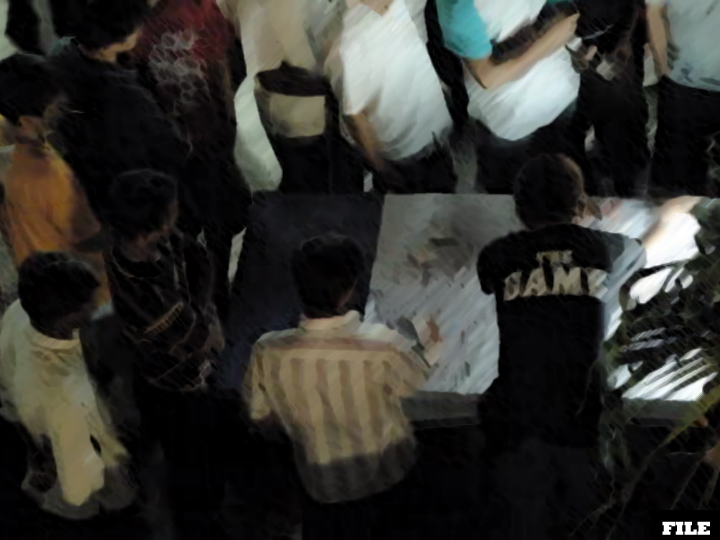 Surrounded by a gang of 80 to 100 angry men and with their backs to the wall, 5 anti-vice plainclothes police officers were really stuck in a tight spot.

That’s when one police sergeant drew his gun as a warning, and that decisive act managed to help the cops fend off their aggressors.

The incident took place on 24 July 2015, when the officers went on an anti-vice raid.

In the back lanes between Geylang Lorong 14 and Lorong 16, the officers saw an 18-year-old promoting a game of “si gor luck” at a makeshift gambling table.

They arrested him and handcuffed him as he tried to flee.

While making the arrest, a crowd of about 80 to 100 people gathered.

They started to get agitated and shouted at the officers to release the teen.

At least 5 people in the crowd shouted vulgarities at the policemen and made aggressive gestures.

One of the men, Ng Hock Hui, was the most aggressive of the lot.

While pointing at the officers and swinging his arms, he managed to knock over a gambling table.

Ng then picked up the table and waved it at the officers.

The officers retreated until their backs were literally against a wall.

That’s when the police sergeant acted.

He drew his revolver and pointed it at the crowd, with the laser beam shining in plain sight.

With that, the crowd started to back off.

By that time, other uniformed police officers had already arrived and were working to disperse the crowd.

Besides the “sig or luck” teen, police arrested Ng and another 2 men for their actions in inciting the crowd.

Four out of the 5 plainclothes officers suffered minor injuries that night.

Ng has been jailed for 10 weeks after pleading guilty to being part of an unlawful assembly.

In his defence, Ng’s lawyer said that Ng was a friend of the teen, and that he was angry seeing that his friend was being treated “roughly”.

His lawyer added that he had “asked a policeman a question and was told by the policeman that it was none of his business. He then became agitated and (admitted to) shouting at the policeman. He was also gesticulating with his arms. While doing so, his arm hit the edge of the gaming table which flipped.”