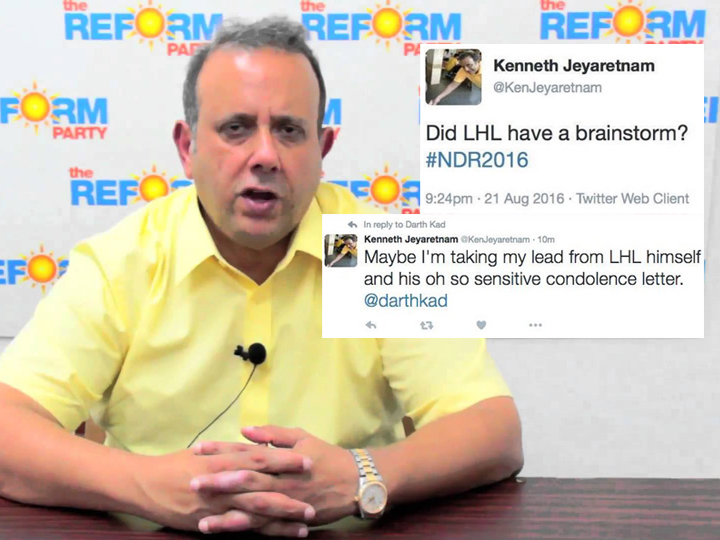 Even though Reform Party chief Kenneth Jeyaretnam later deleted his tweet which had much of the public within both the opposition and Men in White ranks crying foul, the damage was done.

Yet, Kenneth J had a point, though his way of putting it across wasn’t exactly the most tactful for the situation – you can’t mock my father on his deathbed and expect me not to take comfort in your destruction.

It’s the same outrage that many Singaporeans felt when Amos Yee mocked the late Lee Kuan Yew (with much more lewd suggestions albeit) during his funeral.

The condolence letter mentioned by Kenneth J (reproduced below) was written in 2008, on the passing of the late opposition stalwart JB Jeyaretnam.

So while we can curse and swear at Kenneth J and offer him a bar of soap for his keyboard, we should appreciate where the anger stems from.

You can’t kick a man in the teeth when he’s down and expect him not to later take pleasure in your pain.

With that said, the public would expect a level of professionalism from a politician which goes beyond public displays of petty wordplay.

One should rise above the level of those they condemn.

I was sad to learn that your father, Mr Joshua Benjamin Jeyaretnam, has passed away. Mr JB Jeyaretnam was a Member of Parliament for Anson constituency from 1981 till 1986, and a Non-Constituency Member of Parliament from 1997 till 2001. He used to engage in heated debates in the House. Perhaps it was because he and the PAP never saw eye to eye on any major political issue and he sought by all means to demolish the PAP and our system of government. Unfortunately, this helped neither to build up a constructive opposition nor our Parliamentary tradition. Nevertheless, one had to respect Mr JB Jeyaretnam’s dogged tenacity to be active in politics at his age.

However, our differences were not personal. In 1993, one of you (Kenneth) wrote to Mr Goh Chok Tong, who was then Prime Minister, to say that you found employers in Singapore reluctant to offer you a job, and your only explanation was that the employers felt the authorities would not welcome your employment because of your name. Mr Goh replied with a letter which could be shown to prospective employers, to say that the government did not hold anything against you, and that employers should evaluate you fairly on your own merits, like any other candidate, because Singapore needed every talented person that it could find. Mr Goh had previously made the same point to your brother Philip, whom he had invited to lunch. I am therefore happy that both of you have established yourselves in Singapore.