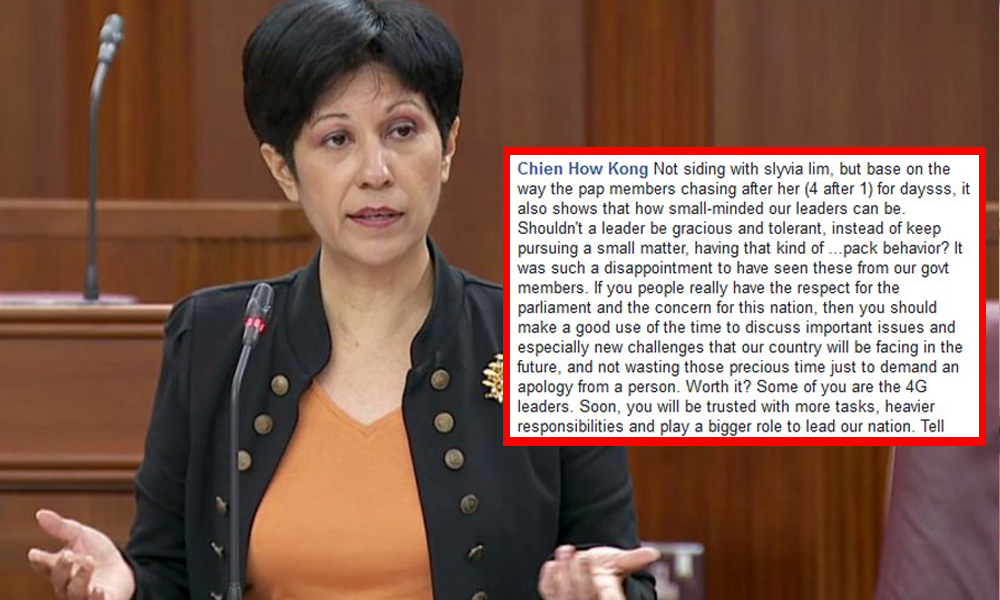 If you thought yesterday’s long-drawn and heated exchange in parliament over MP and Workers’ Party chairman Sylvia Lim’s GST hike “test balloons” suspicion was the end of the whole saga, well, someone else had other ideas in mind.

That someone being PAP MP and Senior Minister of State for Law Indranee Rajah.

In a Facebook post earlier today titled “GST Hike: An Honourable Course of Conduct or not?”, she continued to question why Lim had not apologised for raising her suspicion in parliament, and said “that is why the Leader of the House said this was not the honourable conduct expected of MPs”.

However, Ms Indranee apparently wasn’t counting on the backlash she would receive.

Many took to her Facebook page to criticise her. 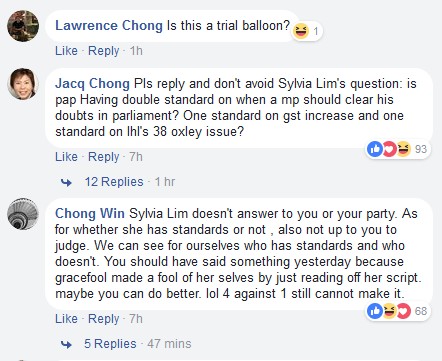 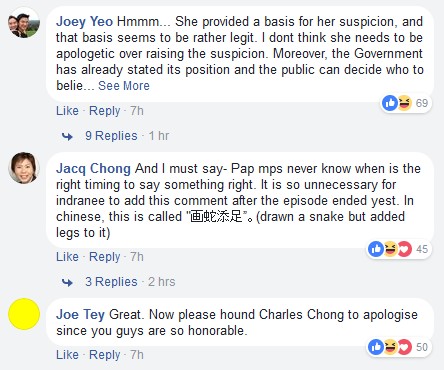 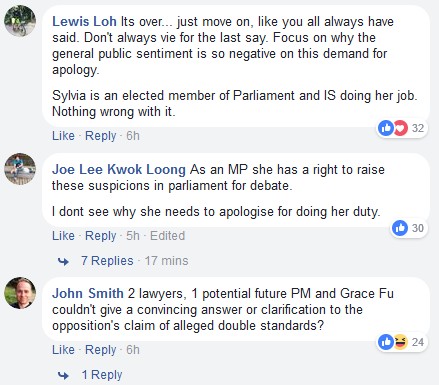 Surprisingly (or not), there’s more flaming than just this – see for yourself!

But this guy, Chien How Kong, probably summed it up best:

“Not siding with Sylvia Lim, but base on the way the PAP members have been chasing after her (4 after 1) for days, it also shows that how small-minded our leaders can be.

Shouldn’t a leader be gracious and tolerant, instead of keep pursuing a small matter, having that kind of… pack behaviour?

It is such a disappointment to have seen these from our government members.

If you people really have the respect for parliament and the concern for this nation, then you should make a good use of the time to discuss important issues and especially new challenges that our country will be facing in the future, and not wasting those precious time just to demand an apology from a person.

Some of you are the 4G leaders. Soon, you will be trusted with more tasks, heavier responsibilities and play a bigger role to lead our nation.

Tell me. How can you expect the people to trust you and have faith in the new 4G govt’s leadership if you guys are so small-minded, and fail to move on when you really should?”

“On Monday I had posted on Ms Sylvia Lim’s allegation that the government floated a “test balloon” about raising GST immediately, but backtracked due to the public reaction.

In Parliament yesterday Ms Sylvia Lim made a statement on this issue. There followed a long exchange involving the Leader of the House Grace Fu, Ms Lim, Minister Heng Swee Keat and Mr Low Thia Kiang.

When the dust settled, the bottom line was this:

Ms Lim admitted that her suspicion may not have been correct.

Mr Low was more forthcoming. He said it was clear that the government had no intention to raise GST immediately and that Ms Lim’s suspicion was not correct.

Yet Ms Lim refused to withdraw her allegation or to apologise.

Leader said this fell short of the standards of integrity and honourable conduct expected of Members. Why did she say that?

Ms Lim gave an extended explanation of why events prior to the Budget Statement had led her to the suspicions she voiced in Parliament last week on Thursday.

Her explanation doesn’t really square with the facts, but let’s put that aside for the moment, and focus on what happened after she spoke last week.

Both Minister Shan and Minister Heng had stood up immediately to point out that the record disproved her suspicion, and invited her to withdraw her comment.

Ms Lim claimed she didn’t have the facts at hand, and promised to go back and check.

Minister Heng issued a statement the very next day (Friday) reciting the facts, and invited her to withdraw and apologise.

I put up a FB post on Monday setting out the government’s successive statements over a five year period, which were all consistently about having enough revenues until 2020, but needing more revenues beyond 2020.

On Tuesday Ms Fu, as Leader of the House, reiterated the facts and invited a withdrawal and apology.

Ms Lim may originally have been under a mistaken impression. Fair enough. But after the facts have been made clear by four ministers, after it had been shown that her suspicion was wrong, after she herself admitted that she may have been wrong, and after her own leader Mr Low said it is clear now the Government had no intention to raise GST immediately, shouldn’t she have withdrawn the allegation and apologised?

Yet Ms Lim did neither. That is why the Leader of the House said this was not the honourable conduct expected of MPs.”