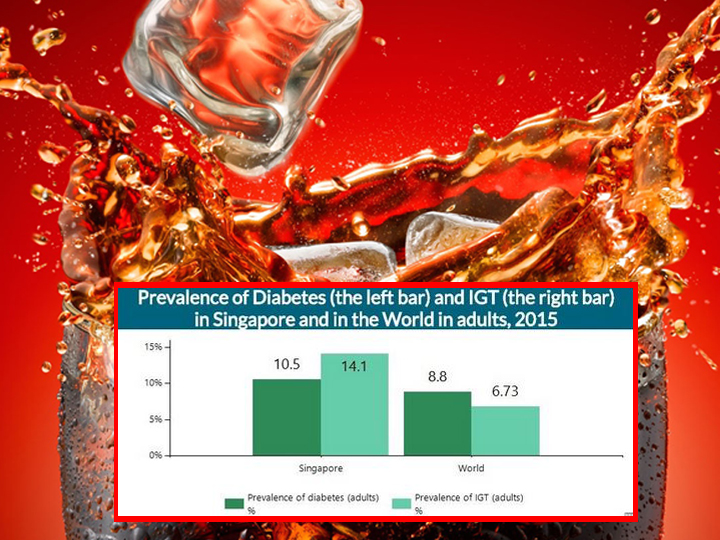 ELSON: The 2010 National Nutrition Survey found that 30 percent of Singaporeans’ daily intake of calories comes from rice – compared to 3.5 percent from sugary drinks.

So why is the Health Ministry looking to impose a sugar tax on such drinks – a minimal contributor to our calorie intake?

Studies have also shown that white rice consumption poses a greater risk when it comes to diabetes (the MOH has already warned us about consumption of white rice), so does the tax on soft drinks make sense?

But still, the government and state media claims this, so we have to be take heed, right?

Let’s take a look at the numbers: 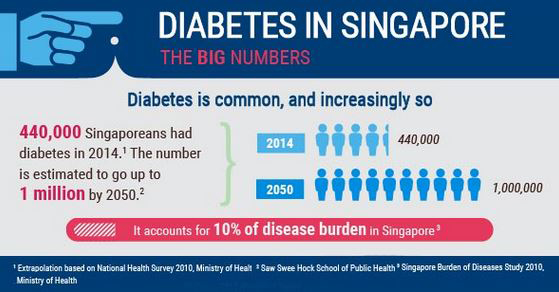 Many would have bought into that those figures above wholesale by now without looking at the fine print.

The thing is, with an aging population, more people will develop diabetes.

In other words, at this point, there is now a higher prevalence of younger people, and so of course the number of diabetics is expected to go up as Singapore supports a larger number of elderly in the future.

Also, we have a growing population, which has seen an increase to 5.6 million people, so naturally we will expect a higher absolute number of people contracting diabetes, no?

Has the information we have been fed been misleading?

(2) Where does Singapore stand in the world?

So where does Singapore rank next to the rest of the world in diabetes?

Is it true when the Straits Times reports that “Singapore is the Number 2 Nation with the Most Diabetics?

In the same article, it states far, far later on that Singapore is number 2 “among developed nations”.

This is how we really rank:

Singapore stands at 10.5 percent, while the global average is 8.8 percent.

The bulk of the top-scorers come from ang moh nations, and ang mohs are less likely to contract Type 2 diabetes.

Also, when you look at the big picture, Singapore’s prevalence of diabetes stands at 10.5 percent,

That’s a bit higher than the world average, but still much lower than other countries like Malaysia and Hong Kong from which we have common heritage.

(3) How scary is the rate of increase in contraction of diabetes among Singapore residents?

Lastly, has the rate of diabetes contraction in Singapore increased over the years, in spite of an aging population?

First, this is the trend for prevalence of diabetes in Singapore (just the crude numbers). 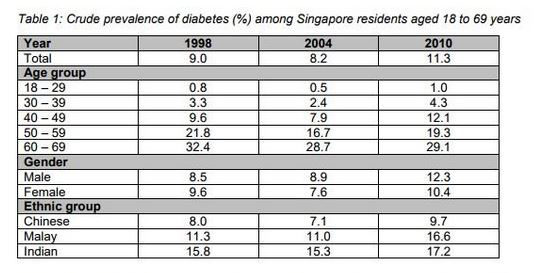 Adjusting the prevalence for an aging population. 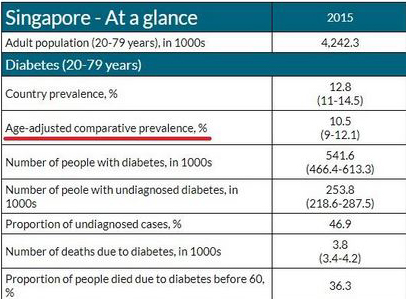 We do not see even a 1 percent increase.

With a growing population that expected to grow by another 1.3 million in the coming years, we will naturally expect more people to contract diabetes.

This, even when the rate of diabetes contraction remains the same.

When you project that to 40 years from now and compare the absolute numbers to today’s figures, it will look pretty scary.

When people tell you with great fear that “more people getting diabetes”, they are right for the wrong reasons.

There is nothing wrong with wanting to live healthy and protect yourself, and you should be encouraged to do that.

But the question now is, why is the government raising this diabetes issue at this time, and looking to impose a sugar tax?

Especially, when the prices of other everyday necessities and essential services such as water and S&CC fees have gone up so sharply in recent times, making life harder for the average ah huat and abang on the street?