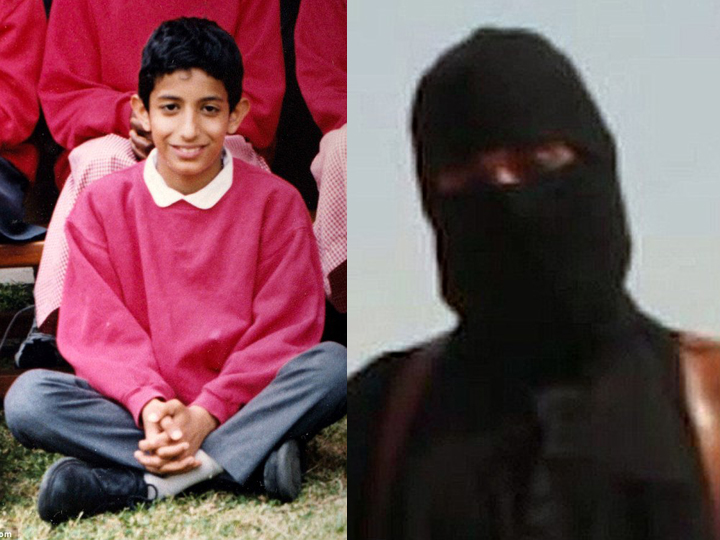 This is the first footage which has emerged of the ISIS’ posterboy killer as a boy loner.

The video shows Mohammed Emwazi, identified last week as the Islamist fanatic filmed beheading hostages in Syria, being chosen by a classmate to join in with a game of lunchtime football.


It was filmed at Qunitin Kynaston Academy, the secondary school in St John’s Wood, north London, where Emwazi was educated.

This friendly kickabout was the first footage of Emwazi to emerge, 11 years before he became the ISIS’s depraved executioner-in-chief.

The ‘football mad’ teenager, thought to be around 15 at the time, is the second person to be chosen for the team.

One of his fellow pupils can be clearly heard shouting ‘Emwazi’, and calling him over to join the team.

But he also appears to be painfully shy, instantly raising his arm to cover his face when he knew the camera was focusing on him.

Since he was identified, Emwazi has emerged as a fun-loving young boy, who adored The Simpsons, Playstation games and eating chips.

He was also said to have wanted to become a Premier League star, scoring goals for Manchester United by the age of 30.

In a handwritten entry in his primary school yearbook, the Kuwaiti-born British citizen, who moved to the UK aged six, wrote: ‘What I want to be when I grow up is a footballer’.

He lists his favourite computer game as shooting game ‘Duke Nukem: Time To Kill’ and his favourite book as ‘How To Kill A Monster’ from the popular children’s Goosebumps series.

The entries showed no sign he would go on to become the world’s most wanted man, who is believed to have beheaded a string of hostages in the name of Islam.