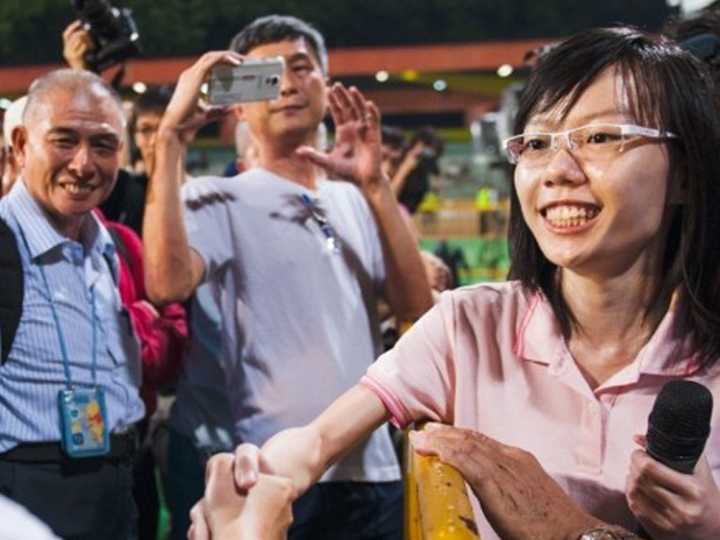 KENNETH JEYARETNAM: Reform Party refutes the false assertions made yesterday evening by Socialist Front sponsored candidate Ms Han Hui Hui during her election rally at Delta Stadium. The rally was attended by at least 200 people and was live streamed by mass media. Videos of the speech containing the fabrications were uploaded onto YouTube and other sites.

Ms Han Hui Hui’s opening speech justifying her reasons for failing to find a place within an opposition party and therefore her reason for being sent by Socialist Front into a three cornered fight, is just a smear.

Her statement had no basis in fact and was wholly fabricated from start to finish. This was simply a blatant attempt at character assassination and moreover is not the first time that we have experienced Ms Han’s creative approach to telling the truth.

The Socialist Front sponsored candidate not only defamed our colleague and candidate Mr Kumar Appavoo but also attempted to cast doubts on the competency and fitness of the Reform Party.

To quote her own words “ If you went to the Nomination centre you will realise….For the opposition party that was there, there was nearly no assenters for them but at the very last minute someone stood up and become the sixth person and so they manage to come in to Radin Mas GRC (sic) If they didn’t come what will happen? There won’t be three corner fight. If I don’t stand for election here what will happen? There won’t be any fight at all Sam Tam will just walkover.”

The facts are that Mr Kumar Appavoo is a veteran of the GE2011 campaign, which he contested for Reform Party in West Coast GRC. He has a strong political pedigree, is a successful business owner and is known for his community work in sports. He is a person of great moral integrity, was previously Treasurer of the Reform Party and is organised and efficient. |

On Nomination day his paperwork was in order and moreover had been sworn by our Commissioner of Oaths beforehand. Mr Appavoo arrived promptly before 11:00 am. There were two returning officers seated at the counters. Ms Han went to one and was observed by our candidate to be taking a very long time to put in her paperwork. This may well be because she was assisted by Socialist Front Chairman Mr Ng Teck Siong who notoriously failed to get his nomination papers in on time for Tanjong Pagar in GE 2011. That farce deprived the voters of a choice and prevented a historic no-walkover election. It is ironic that this team is now fabricating a story in order to take credit for preventing a hypothetical walkover in Radin Mas.

Seeing the bottleneck, our candidate put himself at the other counter behind the PAP candidate Mr Sam Tan. A proposer and seconder and an excess number of assentors of which he needed only four, accompanied Mr Kumar Appavoo. In fact Mr Jeyaretnam had been able to introduce Mr Kumar to assentors very early on. Reform Party has walked the ground In Radin Mas extensively over a period of years and is well known and respected there.

That the Socialist Front sponsored candidate needs to fabricate a story to explain her motivation for breaking the opposition unity agreement and provoking a three cornered fight throws her very motivation for standing into question.

Reform Party has always been at the forefront of attempts to forge Opposition unity. Mr Tan Kin Lian recently praised us for our soft leadership on this issue. We are therefore extremely disappointed by Socialist Front’s actions. We have written to the Secretary General of Socialist Front on this issue but he has not yet given us the courtesy of a response.

For the record Reform Party will state that we believe Ms Han Hui Hui to be a brave young woman. Kenneth Jeyaretnam took up her case very early on and has been very supportive of her. Reform Party spoke and sent speakers to the various CPF rallies at Hong Lim Park. Mr Jeyaretnam recently personally attended her pre trial Court hearing and in fact introduced her to M. Ravi. However, while her bravery, her age and how much she weighs and her need for funds is not in doubt, it was her creative approach to the truth that was a prominent factor in our decision not to field her.

Before issuing this Press release we corroborated the above facts with Mr Hassan who along with his son was one of Mr Appavoo’s assentors present on the day.

This statement was issued by Reform Party Secretary-General, Kenneth Jeyaretnam.