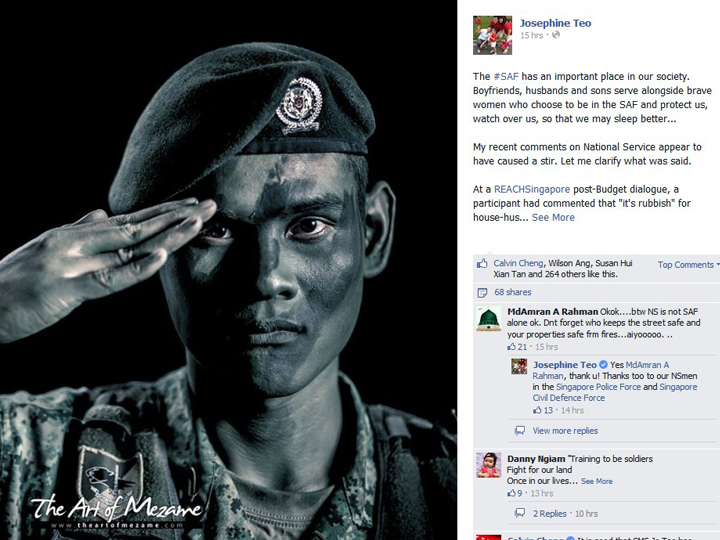 Senior Minister of State Josephine Teo has explained that she was taking a shot at the contributions of Singapore’s National Servicemen with her latest “dollars and cents” comments.

She said that her comment was meant to imply that the contributions of NSmen cannot be valued in monetary terms.

This was in response to a comment by a REACH forum participant, who said that “service pay (allowance) has increased over time and is much more than when he served as a NSF.”

Earlier, another participant had raised the issue of why house husbands with no recorded income were being paid NSman service pay, calling that allowane system “rubbish”.

Mrs Teo’s comment at the post-Budget dialogue session drew much criticism from netizens.

They questioned whether she was devaluing the contributions of NSmen to the nation, and why other occupations, such as ministerial positions, could be measured in “dollars and cents”.

“The #SAF has an important place in our society. Boyfriends, husbands and sons serve alongside brave women who choose to be in the SAF and protect us, watch over us, so that we may sleep better…

My recent comments on National Service appear to have caused a stir. Let me clarify what was said.

At a REACHSingapore post-Budget dialogue, a participant had commented that “it’s rubbish” for house-husbands with no recorded income to be paid a NSman service pay (allowance) of the same level as a working NSman. Many in the audience shook their heads in disagreement.

Later on, another participant in his late 40s voiced a different perspective. Having served NS himself, he is proud to be involved in the defense of his home country. He also noted the “service pay (allowance) has increased over time and is much more than when he served as a NSF.”

Sensing the disquiet in the room, I shared my view that the contributions of NSmen cannot be valued in monetary terms. What the SAF provides by way of the allowance cannot be used to measure the high levels of their contribution – it cannot be measured in dollars and cents.

… I still recall the time my late grandma cried, when my uncle Peter started serving NS. Then, it became my turn when my then-boyfriend (now husband) went to train overseas. We missed them of course. But it was also the realisation that it’s no easy task to keep our homeland safe. This Singapore50 (#SAF50) and any other time, the sacrifices of our NSmen and the support of their families are well-appreciated.

I hope this clarifies. — Jo Teo”