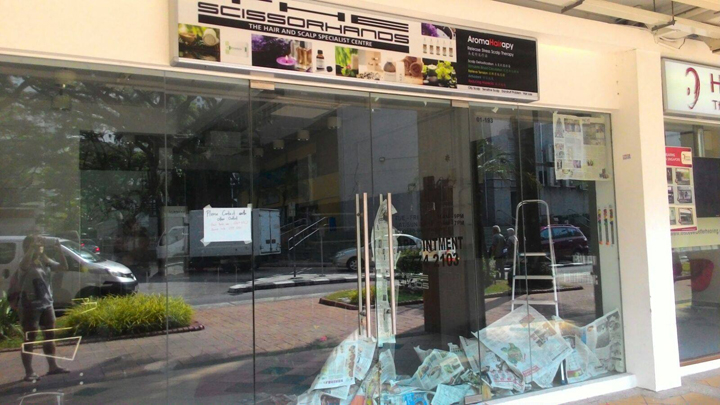 To be Jover-Chewed: to be cheated until want to kneel down and cry; uniquely Singaporean phrase coined after infamous Sim Lim Square cheat Jover Chew.

Hundreds of customers have been left with paid but unused packages after the sudden closure of hair salon chain The Scissorhands and its partner company Shizahanzu.

More than 150 complaints have been lodged with CASE since all 7 outlets suddenly shut their doors in August.

85 customers have lodged police reports, with some customers losingmore than S$2000 worth of unused credit.

Banding together, the irate customers have started a Facebook page demanding justice.

” We are a group of more than 200 victims (and the numbers are growing) from Scissorhand/Shizanhanzu who have bought packages from them, the known amount is now close to $300,000, we believe there are many victims who are affected. There are rumours from ex-staff the total amount the salon collected is in millions!!! Victims if you have not lodge a police report, we strongly advise you to do so now! Many of us have lodged police report and yes we are still waiting for police to investigate into this matter. We strongly believe this is not a business failure, why is the bosses vanish in the air without explaining to their customers?

PS: Victims of both salons! We do have a whatapp group to support one another, do send us a PM if you are one of the victims, we will add you to the group!”

They are angry at being cheated of their money, and at the police force and CASE, which they accuse of not helping them resolve the issue.

Salon staff had apparently been selling prepaid packages to customers until July.

One customer bought a package for S$1699 for 10 sessions of hair colouring and treatment, but didn’t even get a chance to use it. 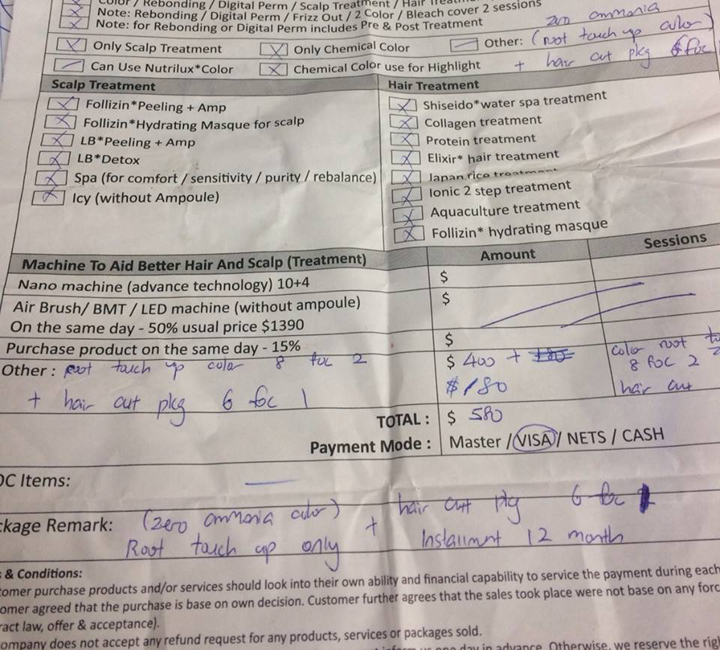 The salon chain has apparently given several different explanations for its closure:

“There have been various versions of stories from the salons’ staff, in the weeks leading up to the final closure. Victims first heard news that some of the outlets were undergoing “restructuring and stopped operations” for a while…. For example, the Bedok branch was abruptly closed on Friday 14 August, and customers were directed to the new Suntec branch with promise that operations will still continue.

Other renditions included stories that the owner had been embezzled of his company funds, and ex-staff had shared with customers that that unused package totalled up to be in millions. Victims were then advised to continue at the Suntec branch while an investor would try to keep things afloat. However, all outlets closed down 2 weeks later, leaving many victims in the lurch.” 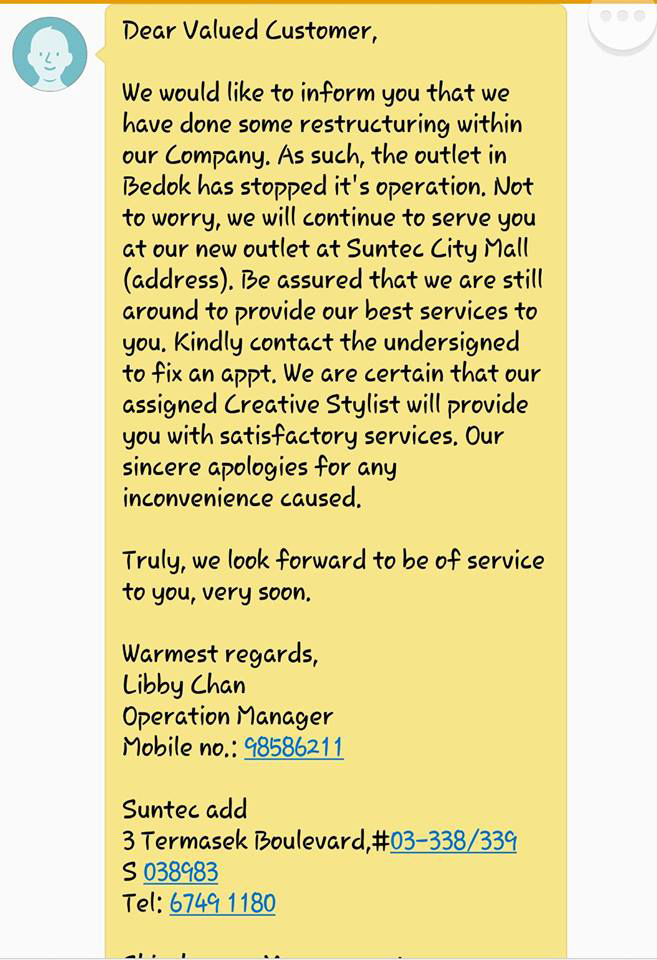 Hairdressers with the salon chain have also filed complaints with the Manpower Ministry over unpaid salary.

The chain reportedly hired more than 20 hairdressers, and owed some of them over two months salary and commission.

CASE says it has been unable to get in touch with the founder, Leong Pang, also known as Pang Kok Kung.