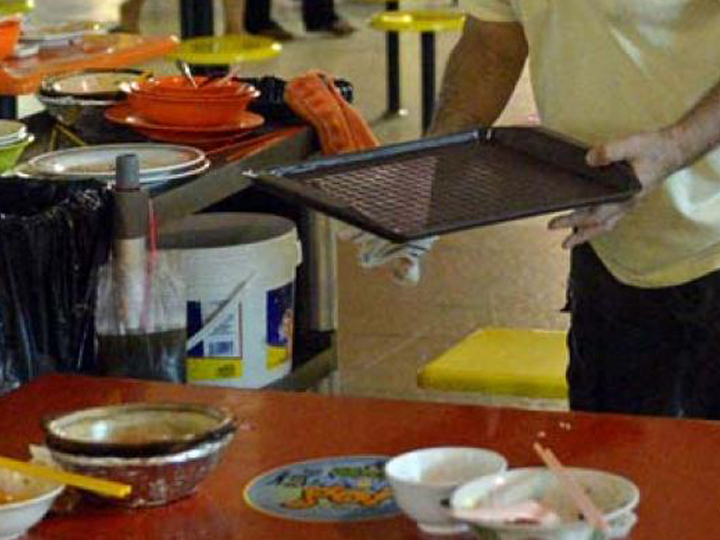 It blamed the fee raise on the annual increment of work permit levy, utilities bills and the cleaners’ minimum wages imposed by MOM.

Many of the stallholders are angry as they cannot afford to bear the burden of this rent hike.

The hawker centre tables are also left in a mess as cleaners have gone “on strike”.

Stallholders received calls from the cleaning company about the impending increase of the daily cleaning fees by S$5 – S$3 increase for cutlery collection and S$2 for cutlery washing.

On Wednesday (11 Feb), cleaners didn’t turn up for work and the stallholders were left scrambling for solutions.

Some even spent up some S$100 on the disposable cutlery, and customers were inconvenienced as stallholders took turns to clear dirty dishes.

What was more frustrating for customers – stallholders raised the price temporarily to subsidize the cost of the styrofoam cutlery, some by up to 20 cents.

Some stallholders said the fee is fair as a styrofoam bowl can cost 17cents.

Representatives from the Merchant Association then negotiated with the cleaning company and the cleaners resumed work the next day.

In 2013, NEA called for a tender for centralised dishwashing at 11 hawker centres. This was supposed to address the labour crunch.

NEA said the change would “benefit consumers” as it would allow cleaners to focus on clearing and wiping tables, while freeing up hawkers to concentrate on preparing and selling their food.

However, the cost of centralised dishwashing is estimated to be as high as S$1,000 per month for participating hawkers.

For now, it’s not clear if the hawker centre at Jurong West falls under the NEA’s centralised dishwashing programme and it’s also not known who the cleaning company that services Jurong West Hawker Centre belong to.