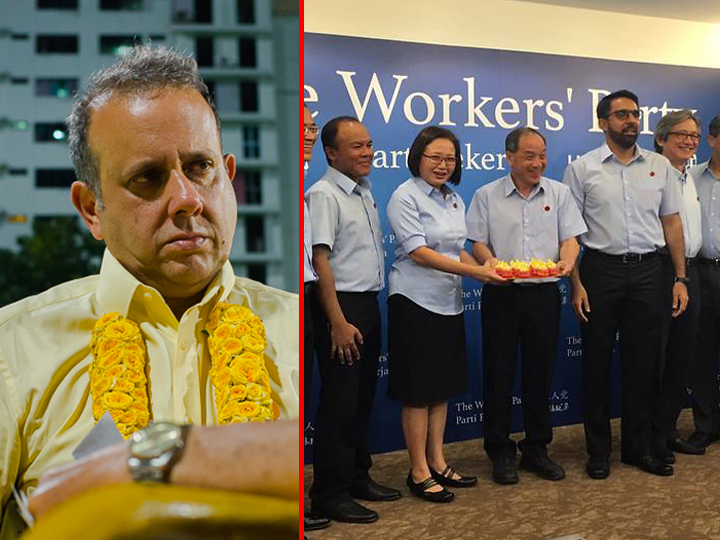 “The biggest irony is that the WP, or rather the leadership triumvirate of Low, Sylvia Lim and Pritam Singh, are now facing lawsuits from an independent committee that they appointed. If they lose and end up being bankrupted and losing their seats, like JBJ, this will be poetic justice.”

Reform Party chief Kenneth Jeyaretnam has hit out at the Workers’ Party for downplaying the significance of his father Joshua Benjamin Jeyaretnam’s contributions to the party during its 60th anniversary celebrations.

He said that that this is because book because WP chief Low Thia Khiang, “like the PAP, has a vested interest in minimising his former mentor’s role and puffing his own.”

Mr Jeyaretnam added that Mr Low would have “remained a Chinese teacher and never have been elected to Parliament” if not for the late JBJ, in a post on his personal blog titled “On Its 60th Anniversary The WP Conspires with PAP to Create A Fake History”.

“Yesterday the State Times published an Insight article on  the Workers Party 60th Anniversary. A misnomer, since the article was remarkable for its lack of insight or rather for its deliberate glossing over of the real reasons for the WP’s success and for the airbrushing of my father, JBJ, out of history. Everyone in the West now knows about Fake News but long before it became a global phenomenon the PAP were already masters at it. In their eagerness to emulate the PAP, puff up their leader Low Thia Khiang and play down JBJ, WP prove that they are equally adept at fake news.

David Marshall, the founder of the WP, is given most prominence despite the fact that he left the party in a huff in 1963 and had nothing to do with the WP after that date. The party was dormant until it was revived by JBJ in 1971. It could thus be said that JBJ was the true founder of the WP. Certainly he created the party as we know it today. He poured all his wealth and more into the party. He sacrificed his family including ultimately my mother’s life. Without JBJ’s sacrifices and his intellectual ability to challenge the PAP, it is safe to say that Low Thia Kiang would have remained a Chinese teacher and never have been elected to Parliament.

Nothing of this is mentioned in the article. State media cannot omit my father’s historic breakthrough at Anson in 1981 but they downplay it by getting PAP academic Derek da Cunha to say that it was due to “specific constituency level issues”, which has always been the standard PAP line. There is complete silence about the disgraceful way LKY abused power and used a subservient judiciary to get rid of JBJ by bringing fake charges against him in 1986, securing a conviction which removed him from Parliament and prevented him from standing again for five years. The conviction was overturned by the UK Privy Council in 1988, though the PAP Government refused to vacate the conviction, maintaining the fiction that JBJ was a criminal which persists to this day.

Low Thia Khiang’s victory in Hougang in 1991 was only possible because of JBJ’s performance in Parliament where he put most of the ministers and MPs to shame to such an extent that the PAP stopped televising Parliamentary proceedings. Comparing JBJ’s performance with the meek current crop of WP MPs, all of whom seem unfamiliar with the basic principles of democracy and effective Parliamentary opposition, one can easily understand why the PAP have been very happy with the WP under its new leadership.

None of this comes over in WP’s 60th Anniversary book because Low like the PAP, has a vested interest in minimising his former mentor’s role and puffing his own.

In an appalling display of racism which illustrates perfectly the double standards of the PAP when it comes to sedition offences, the State Times quotes a so called WP “stalwart”, Lim Ee Ping, as saying that “At that time, if it was Jeyaretnam who fought in Hougang, he would not have been able to win. No matter what you say, Jeyaretnam was not Chinese, that area was a little racialised,”

This is the kind of nativism that even Donald Trump and Steve Bannon would not dare express openly. How can Singapore claim to be a First World nation when these sentiments are not only expressed openly but voiced by the WP but the PM and all his MPs?

It is of course also not true and therefore Alternative Facts. My father often said that most of his support came from the Chinese community and not from the Malay or Indian communities, both of whom tend to be more fearful  of supporting the Opposition. exactly what has been said by Lim Ee Ping in this article was said about Anson and we know what happened there. That the dominant Opposition party in Singapore is able to get away with espousing such openly racist and seditious views is just another sign that the WP under Low are really little different from the PAP and are totally unfit for the role of opposition.

The truth is, as shown by JBJ’s victory in Anson against a Chinese candidate in both 1981 and 1984 (with an increased majority) and an Indian PAP candidate’s easy victory against Chee Soon Juan in 2016 in Bukit Batok, voters in Singapore are colour blind. Tharman would probably be Prime Minister by now if it were up to the Singapore electorate.

The article also glosses hurriedly over the circumstances of my father’s departure from WP in 2001, merely saying that “Mr Jeyaretnam left in unhappy circumstances”. The truth is Low and the other CEC members refused to help my father pay off his debts arising from a  supposedly defamatory article in the Hammer. I have never been able to understand why my father ended up having to pay off the debt when he did not write the article and Low was a member of the CEC.  My father always maintained that LKY was very pleased with Low for doing what the PAP had been unable to do and removing him from the WP.

This cosy collusion is over though. The biggest irony is that the WP, or rather the leadership triumvirate of Low, Sylvia Lim and Pritam Singh, are now facing lawsuits from an independent committee that they appointed. If they lose and end up being bankrupted and losing their seats, like JBJ, this will be poetic justice. And the PAP can claim that they had nothing to do with it.”